While the first-place winner of the 2019 World of Energy Festival of Trees display, affectionately called “the peacock tree,” stood out for its vibrant, feathery array of deep purples, turquoise and emerald green decorations, its message was what viewers remembered most.

The tree, decorated by Seneca, S.C.’s Century 21 Hometown Realtors, called awareness to suicide prevention and mental illness education, which is the key focus of the local nonprofit Making My Mark.

As part of the Festival of Trees display and voting contest, dozens of holiday trees are decorated by local businesses, civic groups and nonprofits, and the three trees with the most votes receive prize money for the nonprofit of their choice. This year’s Festival of Trees display and voting contest will be virtual Nov. 30-Jan. 8, and Century 21 will once more sponsor Making My Mark. (Note: First place winners will not be allowed to win first place the following year.)

“Everyone has been touched by suicide, and it hits home for many in Oconee County,” said Century 21 realtor and tree decorator Stacey Jinks. “This year, with suicide on the rise, we want our community to know that there is an outlet for anyone who needs help. Nothing is ever too big or small when it comes to mental health.”

Making My Mark founder Hal Dunlap said his organization’s goal is to increase suicide prevention awareness and to educate and encourage enlightening conversations regarding mental illness and all the associated stigmas.

“Suicide is something no one wants to talk about and certainly no one wants to experience,” Dunlap said. “People don’t want to acknowledge mental and emotional concerns in themselves or in those they love. [But] the statistics are sobering and alarming. One suicide happens in this country every 12 minutes – that’s an average of 129 suicides each day. Some experts say that there are 25 suicide attempts for every suicide.”

Dunlap, who lost his son, Mark, to suicide in 2018, travels to schools, civic organizations, businesses and churches across the country to educate, provide training and offer support.

The biggest challenge ahead?

“Mental illness issues have been exacerbated by the societal changes caused by social media,” Dunlap said. “Being aware of social media impacts is critical in today’s world. We must train and educate our children for success in a world that is rapidly changing and offers challenges never faced by other generations.

“We’ve got to break down barriers and get those conversations started.”

The Festival of Trees display and voting contest is one way local nonprofits like Making My Mark can reach out, raise awareness and provide support. This year, there are 15 trees with their own stories to share. With this year’s virtual format, perhaps these organizations will touch viewers near and far.

Be sure to visit duke-energy.com/FestivalOfTrees Nov. 30-Jan. 8 to view and vote for your favorite tree – you will make an impact on a deserving nonprofit and the community it supports. 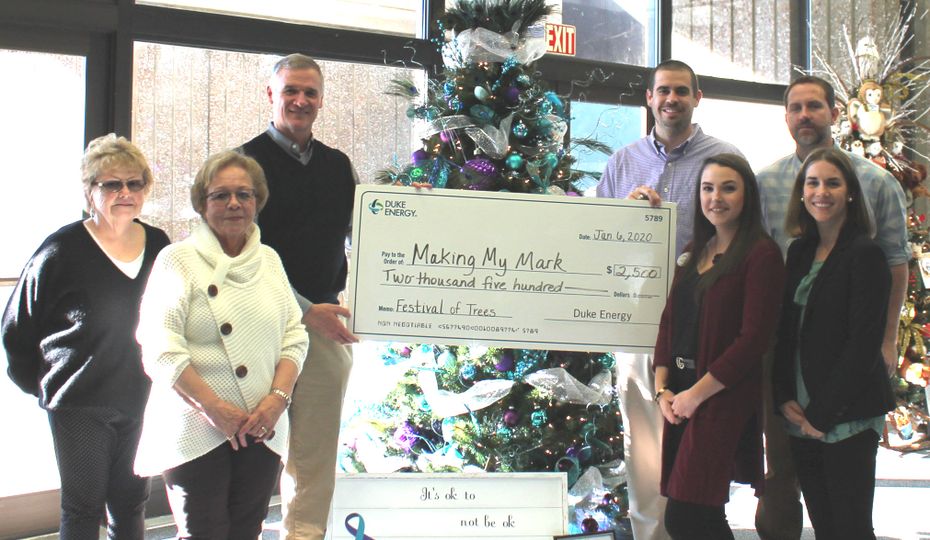