To highlight a longstanding partnership between Robinson Nuclear Plant and the United Way of Hartsville, we sat down with Joann DeLong, Executive Director of the Hartsville United Way.

How did you come to work at the United Way?

My husband and I found Hartsville online, and we decided to move here. I first worked at the Greater Hartsville Chamber of Commerce. After two years there, I realized that it was time to move on. Two United Way board members approached me about an opening at the United Way. I responded to them, “I have no idea what the United Way is or what they do, but I will find out and get back to you.” After coming into the position, I promised to give the board one year no matter what. During that first year, I fell in love with the United Way. When I was asked after that year if I was going to stay, I said, “Absolutely!” Now, I plan to work for the United Way until I retire.

What was your first interaction with Duke Energy’s Robinson Nuclear Plant?

My first interaction with the plant was for our Coats4Kids program in which we provide coats to children in need during the winter. I started that program because I saw children huddled together outside in winter at one of our local schools. When asked why, the principal shared that many could not afford them. Once the program got off the ground, I contacted Teresa Hodges [Robinson Nuclear Plant retiree] to ask about bringing a donation box to collect coats. Teresa called me days later to ask for another box because it was full. A few days later, she asked for yet another one. When I arrived to gather the donations, my van was packed full of coats for children. The employees were so generous!

What is your most memorable project with Robinson employees? 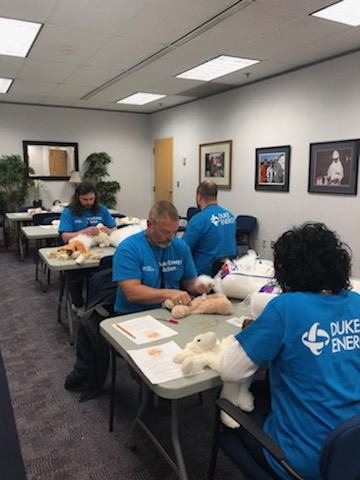 My most memorable project with Duke Energy employees at the plant was when employees donated stuffed bears they had assembled. It was something that I would not have thought of as a need, but those stuffed animals were such a hit with children coming to the office! When you see a child come into our office, it’s usually at a low point. They are either a fire victim or lost their home in some way. Being able to give them a stuffed animal that is theirs has such an impact no matter the age. We were giving these stuffed animals out with our bed donation program and always hear back how much the children love these small gifts.

What were your impressions coming to a nuclear plant for the first time?

Coming the first time to the site was intimidating. I remember seeing the security officers coming out in all their gear. However, those officers became more sociable and would smile and say, “Hey, it’s the United Way lady!” That put me at ease. Over time, I would be sure to bring them a United Way t-shirt, and they would let me know when there was a new person that I could offer a shirt to.

I’ve been to the site many times, but my favorite memory was when I was selected to be the judge of the “Taste of Robinson” contest. I was nervous the first time because I didn’t know what to expect from volunteer cooks, but they impressed me. Despite living in the south, I never liked grits, but one employee convinced me to try his sausage grits. It was like heaven! That turned me into a grits fan, but only with sausage. It was a fun event for employees to enjoy, but it also provided a greater good in that it benefited the United Way by donating all proceeds from the fundraiser. 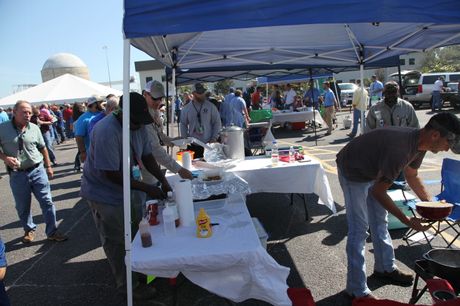 What is your most memorable visit?

I got a call from an employee leading the Duke Energy campaign at the site to come to a meeting. With tablet in hand, I went to where I normally go for small meetings. I was redirected to another building. An employee opened the door to the room, and it was an auditorium filled with employees! I sat down and looked up to see my name on the agenda as the next speaker! I wasn’t expecting it, but it turned out to be the best presentation at Duke ever. There were great questions and interactions. It ended up being the best campaign year ever for Duke employees.

What is your impression of employees at Robinson Nuclear Plant?

From auctioning off parking spaces to organizing an employee golf tournament, the staff always comes up with creative ways to raise money. Their generous giving really helps all of our programs. I’ve worked with employees through the years who are leading the campaign. Each has had a different personality and approach. They all are committed to doing their best for United Way, and each has had an impact on helping our community.

In general, Robinson has a big impact on the community. Many times, people will ask me how I feel about having a nuclear plant in the area. I say, “It’s awesome!” I know there are restrictions and guidelines that you all have to follow, and I know you’re doing it. I don’t think twice about it. From the people that you employee and those companies that you do business with, Robinson has a great impact on the economy in that way, but there is also an impact with the projects employees are doing in the community with organizations like the United Way. It’s a win-win!

What do you wish someone knew about the United Way? 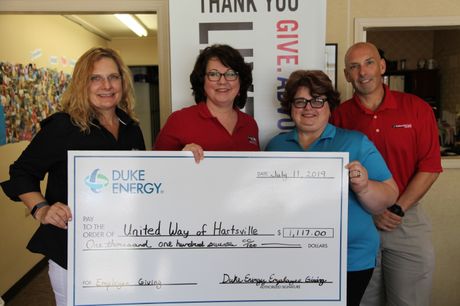 No amount that someone gives is too small. It all adds up and makes a difference in someone’s life. We try our best to make things happen in our community. If we can’t take on someone, I keep a list in my office just waiting for the time for the right funds or right person to help bring it to fruition. Duke Energy and Robinson Nuclear Plant have helped to take some of those items off my list!

How 10 antique railcars made their way to museum