In 1975, judges representing the American Society of Civil Engineers (ASCE) were faced with a challenge – to select the organization’s Outstanding Achievement Award winner. Judges had to choose from some of the country’s greatest engineering achievements of the time. 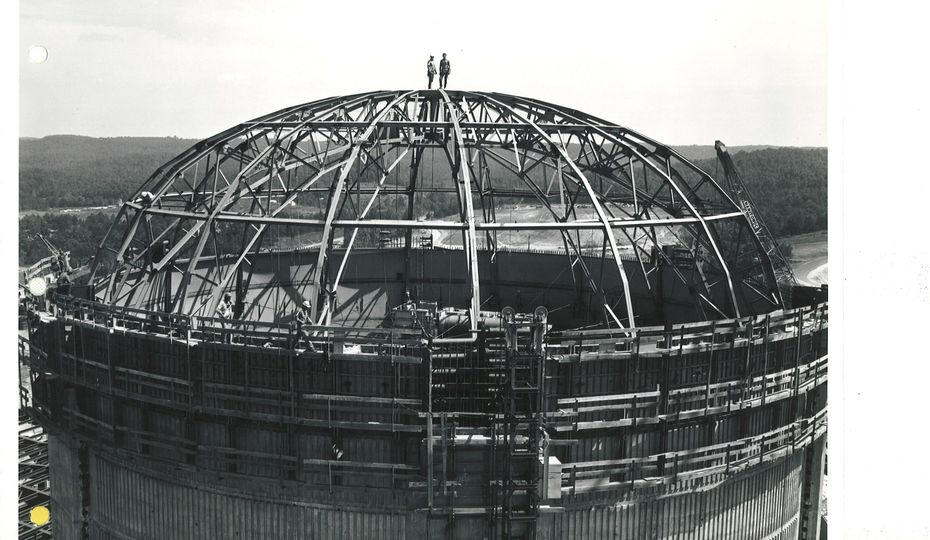 Some of the finalists included the San Francisco Bay Area Rapid Transit System (BART), which was the first totally new mass transit system launched in the U.S. in the past 50 years; the Dallas-Fort Worth Airport, which covered more ground than Manhattan Island; and the Bruckner Interchange in Bronx, N.Y., that connects traffic between Long Island, Bronx and Westchester, N.J. eliminating the daily congestion of 150,000 vehicles converging at one time – that project alone used 67 million pounds of steel. Other ASCE award winners from past years included the World Trade Center (1971) and the Gateway Arch (1967).

Alas, in 1975, it was Duke Energy’s Keowee-Toxaway Project, nestled in the rural, rugged western corners of South Carolina and North Carolina, that earned the title.

Today, with addition of Bad Creek Pumped Storage Hydro Station in 1991, the Keowee-Toxaway Project produces more than 4,400 megawatts of clean-air electricity for Duke Energy customers, and the pristine lakes provide a natural resource for the public. 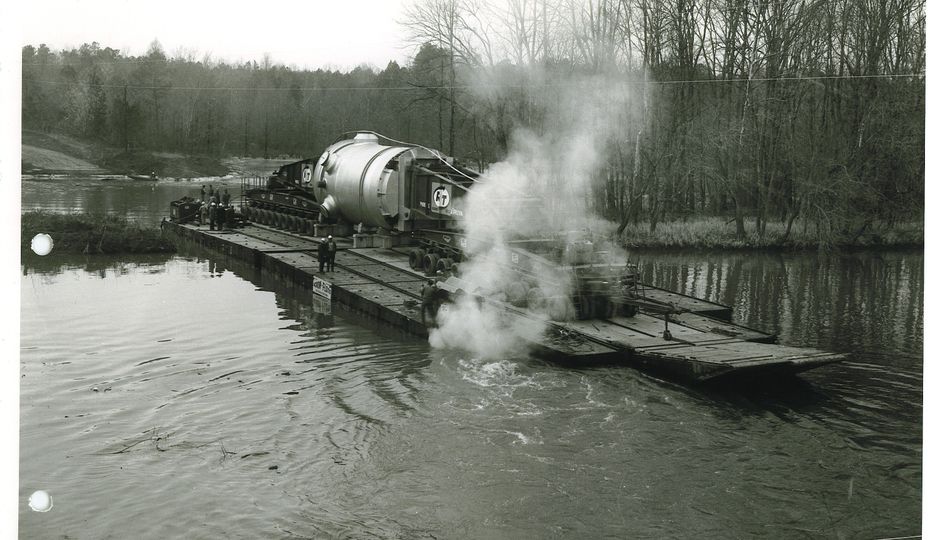 Oconee’s unit 1 reactor vessel weighs 325 tons and traveled from Indiana to the site in 55 days. Pictured, the vessel, atop a 288-wheel truck, floats across Stevens Creek near North Augusta, S.C., in January 1970. The island in the center of the creek was dredged to accommodate the hauling equipment.

At that time, completion of Oconee Nuclear Station made it the world’s largest operating nuclear plant. Today, the site, which sits on Lake Keowee’s shoreline in Seneca, S.C., provides 24/7 electricity to nearly two million customers and continues to be a top electricity provider in the U.S.

Construction of the massive nuclear power plant was a grand project for its day; and, at that time, Duke Power Company, now Duke Energy, was one of few utilities in the nation to perform both design and construction of its facilities with its own professional staff. More than 18 years of research and planning went into the project before groundbreaking in 1967.

The vote to move forward with the project was cast after a computer had been “programmed to evaluate present and future steam generation units every two hours for the next 30 years,” according to a 1968 article from The Journal and Tribune.

When the Keowee-Toxaway Visitors Center, now known as the World of Energy, opened its doors in July 1969, more than a quarter-million people poured into the center in the first year to watch construction of the plant and learn more about nuclear power and the Keowee-Toxaway Project. More than a million visitors had come to watch history in the making by the time the ASCE presented the Outstanding Achievement Award in 1975. 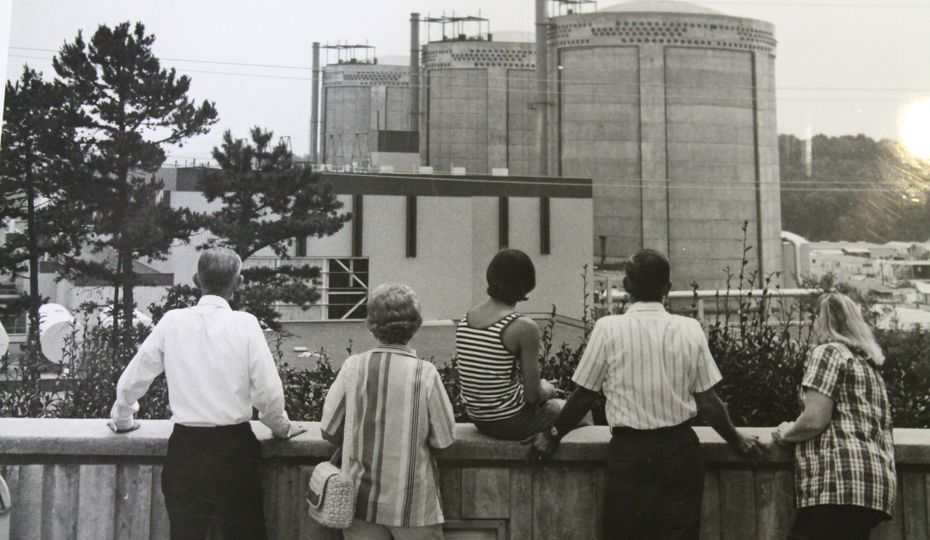 Visitors to the Keowee-Toxaway Visitors Center, now the World of Energy, look at the newly constructed Oconee Nuclear Station. The center, which opened in 1969, had more than one million visitors by 1975.

Crowds also gathered near the site in February 1970 to watch the “world’s largest truck” deliver the first of three 325-ton nuclear reactor vessels to Oconee. Oconee unit 1’s reactor vessel was set in place on Feb. 8, 1970, exactly 55 days after it left Babcock & Wilcox’s manufacturing facility in Mt. Vernon, Ind. The vessel traveled nearly 2,000 miles, using barges, special rail cars and specially designed vehicles to move it over water, rail and land. Traveling at 5 miles per hour, the 240-wheel truck, built in France, was powered by two 600-horsepower tractors and weighed 175 tons empty. Railroad bridges were modified, a stream’s island was cut in half and special bypasses were designed to accommodate the vessel.

“I have never seen things done that we are doing to get this vessel to the site. I have had lots of jobs comparable to this before, but never have I seen the amount of interest shown in this one. And I’m just about as interested in just watching this operation as the general public is,” stated Carl Robb, a contract vendor who prepared the land route bypasses.

Inside the plant, there is approximately 3,000 miles of cabling, or enough cabling per unit to stretch to Houston, Texas. The Keowee-Toxaway Project has enough concrete to pave a sidewalk from Oconee Nuclear Station to Hawaii. 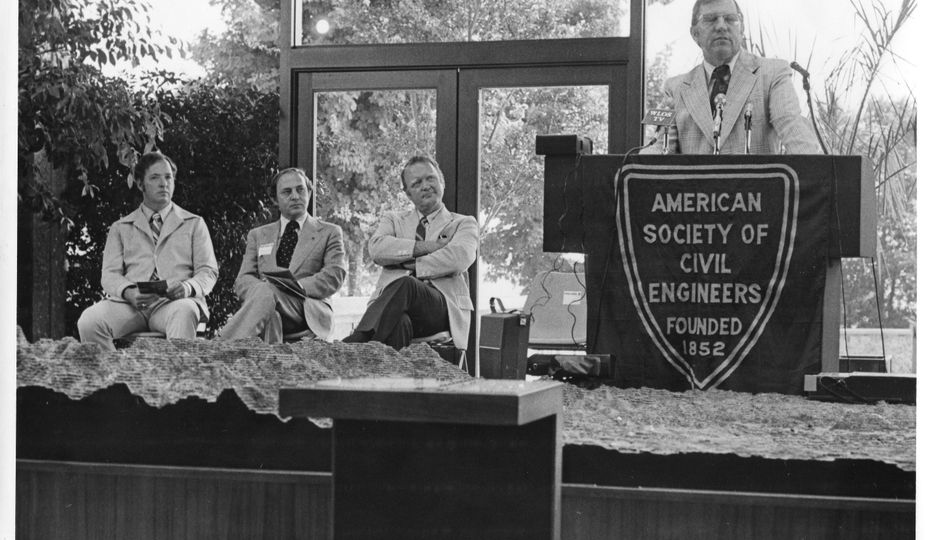 The American Society of Civil Engineers’ Outstanding Civil Engineering Achievement Award was presented at the World of Energy on Aug. 22, 1975. Duke Power Company executives and ASCE leadership are pictured.

Doug Beam, a Clemson University civil engineering graduate who took over as project manager in 1972, stated in a 1975 special edition of the Greenville News that “he felt right at home in one of the toughest assignments around.”

Today, nearly 50 years since it began operating, Oconee Nuclear Station continues to generate clean, reliable electricity for millions of customers. Over time, the station, as well as the project’s hydro stations, have maintained their investments through installation of new equipment and modern technology. Duke Energy is the largest taxpayer and one of the largest employers in Oconee County. Homes continue to pop up around the Lake Keowee shoreline, and millions of visitors flock to the cool, clear mountain waters year after year for recreation.

Truly, the Keowee-Toxaway Project, not only exemplifies the ASCE’s outstanding achievement, but it continues to create progress in modern technology and impact the local economy and communities. With its beautiful lakes and clean energy generating facilities tucked into the rolling foothills of the Blue Ridge Mountains, it has far surpassed anyone’s expectations for its impact on the region.