If you were to guess which low-carbon energy source produces the most electricity in the U.S., what would you choose? Hydropower? Solar? That’s one of the questions the Nuclear Energy Institute (NEI) asked the public this fall.

The NEI opinion poll revealed that 85 percent agree “we should take advantage of all low-carbon energy sources, including nuclear, hydro, and renewable energy, to produce the electricity we need while limiting greenhouse gas emissions.” However, most of those polled (70 percent) were unaware that nuclear power plants produce the most clean air electricity in the U.S. 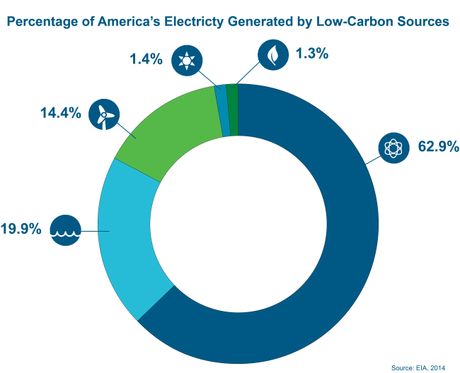 Nuclear power plants provide the majority of low-carbon electricity in the U.S.

According to the Energy Information Administration (EIA), nuclear energy generated about 63 percent of our country’s low-carbon electricity in 2014. But, not everyone knows this, despite the fact Americans say clean air is one of the most important considerations when it comes to electricity generation.

Like renewables, nuclear power plants produce no carbon emissions when they generate electricity. This is particularly important in states like South Carolina, where nuclear provides more than half the state’s electricity. Independent studies from organizations like the National Renewable Energy Laboratory show that nuclear energy’s life-cycle carbon emissions are comparable to renewable energy sources, too. Life-cycle assessments take into account construction, mining, processing and disposal of fuel, routine operation and facility decommissioning.

Nuclear energy also has the advantage of being the only low-carbon power source capable of generating electricity 24 hours a day, every day of the year. As former Secretary of Energy Spencer Abraham recently explained at a Nuclear Matters event in South Carolina, the state’s nuclear energy plants “are critical for ensuring dependable electricity service for consumers.” Secretary Abraham also emphasized nuclear energy’s importance in reaching carbon reduction goals in the Carolinas noting that it’s "reliable, efficient and not intermittent.” Nuclear plants, therefore, help provide the power we need without the air emissions we don’t need.

All sources of low-carbon electricity are important for a clean and reliable energy future. As Duke Energy continues to invest in renewable energy, our nuclear plants remain an important part of our diverse mix of energy sources to provide increasingly clean electricity for our customers.