One way the energy industry measures the reliability of power plants is by regularly calculating capacity factors.

Capacity factor is the measure of how often a power plant runs for a specific period of time. It’s expressed as a percentage and calculated by dividing the actual unit electricity output by the maximum possible output. This ratio is important because it indicates how fully a unit’s capacity is used.

Capacity factors vary considerably by plant and fuel type (see graphic below). As you can tell, nuclear energy’s average capacity factor is above 90, meaning the average nuclear plant remains on line, generating electricity, more than 90 percent of the time. 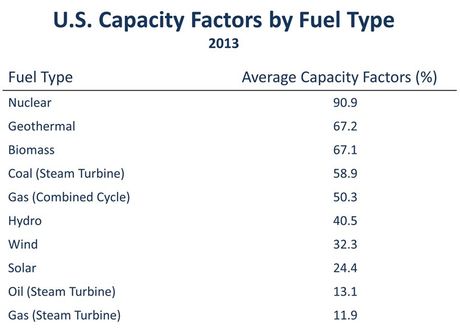 In 2014, the 100 operating nuclear plants in the U.S. had an average capacity factor of 91.8 percent. This is the highest level ever recorded and attributed to the fact that nuclear plants had fewer and shorter refueling and maintenance outages and less unplanned outages. In 2014, the average refueling outage duration was 37.2 days compared to 41 days in 2013 and 46 days in 2012. 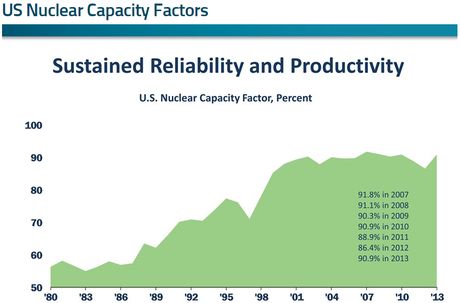 In addition to supplying nearly 20 percent of America’s electricity, nuclear energy is a proven, dependable source, providing on-demand baseload electricity around the clock – whether during record heat or arctic cold.

Posted July 15, 2016 by Paul Lindsey
The average capacity factor for wind hides the huge variability of output. Twice, I've analyzed the output of the wind farms feeding the Bonneville Power Authority, once for 6 months of data and again using a year of data. This is possible because the BPA collects data in 5 minute increments AND it is available for anyone to download and analyze. In the BPA's situation, the standard deviation was greater than the average! Plotting the output resulted in something one might see on a seismograph.