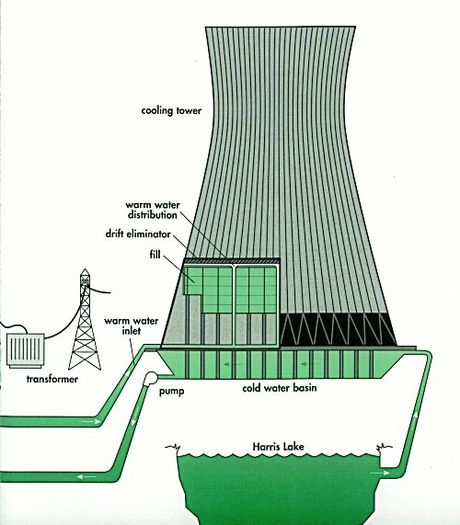 On a clear day, you can easily see the Harris Nuclear Plant’s 523-foot high cooling tower from downtown Raleigh, about 20 miles away. It’s become an iconic symbol of the power plant. On the other hand, if you drive 180 miles southeast to the Brunswick Nuclear Plant on the Atlantic coast in Southport, N.C., you won’t see a cooling tower.

Since both are nuclear power plants, why does only one have a cooling tower?

First, let’s review the purpose of a cooling tower. All thermoelectric power plants that use heat to make steam to drive a turbine generator need a system to cool water. The majority, including Harris and Brunswick, use a once-through cooling system, where water is drawn from a lake, river or reservoir. The difference between Harris and Brunswick is really based on their location and the source of cooling water.

Second, it is important to note that the cooling systems at both plants are designed for plant cooling and to protect the environment. In fact, the use of cooling towers for new power plants larger than 100 megawatts (MW) was mandated by the Clean Water Act of 1972 to protect the aquatic life in the river or lake from which the cooling water is taken.

To complete the cycle, a discharge pipe returns water to Harris Lake within a degree or two of the lake’s normal temperatures. This ensures there is no harm to the fish in Harris Lake. The lake is popular for sport fishing, boating and water skiing.

The cooling process is similar at the Brunswick Plant, except for the source and size of the source of water. Instead of drawing water from a manmade lake into a cooling tower basin, the water is pumped into the plant’s condensers directly from the Cape Fear River. The warm water is then discharged and cooled as it travels more than five miles through a manmade discharge canal until it finally meets its destination – the Atlantic Ocean! The warm water quickly dissipates in the ocean, causing no harm to the aquatic environment (and actually makes quite the fishing spot for local anglers).

The Brunswick Nuclear Plant’s two reactors came online in 1975 and 1977, and Harris, which has one reactor, began operating in 1987. Today, it is more likely that cooling towers would be required on all new nuclear plants to meet environmental regulations than in the early 1970s, when the Brunswick Plant was under construction. In fact, only two of Duke Energy’s six operating nuclear sites use cooling towers.

Inside the natural draft cooling tower at the Harris Plant, the cooled water literally rains back into the basin of the tower, while the warm, moist air rises to the top. What you see coming from the top of the cooling tower is clean water vapor.