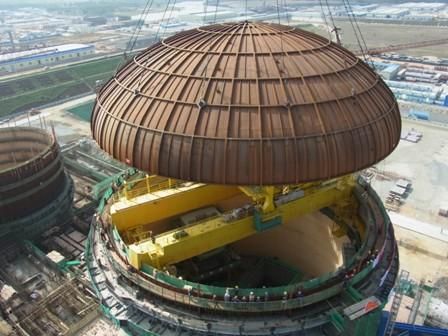 The reactor containment dome of Changjiang 1, a Chinese nuclear unit, is lowered into place (Image: CNECC).

Since 2007, the U.S. economy has been shaking off a deep recession that left many people jobless and companies scrambling to avoid bankruptcy. What may be surprising is the positive impact on our economy from the worldwide growth in nuclear power plant projects.

This formula for success has been simple; new plant construction abroad equals jobs and economic opportunities as U.S. companies provide services and equipment. The U.S. Commerce Department estimates the international market for equipment and services related to export opportunities at $500 to $740 billion over the next 10 years. The positive economic impacts in the U.S. from the international growth in nuclear energy can be summarized in these two points:

Because of their large scope and technology needs, nuclear generation projects create a broad range of export opportunities for many U.S. companies. For example, a new nuclear project requires approximately:


Many of the countries planning new nuclear plants do not have the required infrastructure or technical expertise to support these efforts. U.S. companies with nuclear design or manufacturing capability are involved with many of these projects, with demand for services expected to grow.

In general, the nuclear energy industry provides a wide range of benefits to the U.S. economy:

A new nuclear plant construction project may require up to 3,500 workers at peak construction.

The U.S. nuclear industry remains healthy and continues to support the economy at many levels. The new generation of nuclear technology employed at the Vogtle and V.C. Summer construction projects reflects the safety philosophy of existing reactor designs, as well as new safety systems that make already safe nuclear energy even safer.

Nuclear Engineers are People Too