At every nuclear station in the country, radiation protection (RP) teams work daily to control and reduce the amount of occupational radiation exposure workers receive while performing various jobs in the plant. 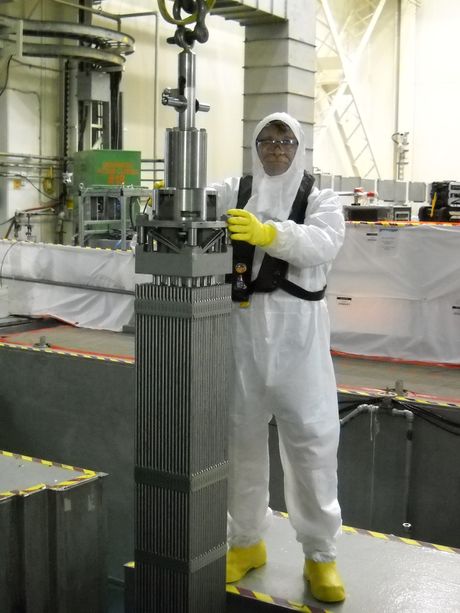 All nuclear employees take radiation very seriously. If work is required in a radiological area, employees must wear the proper protective equipment, which differs depending on the work area and the work required.

Radiation is a natural part of our environment and we all receive small amounts of radiation from the sun, the soil and the food we eat. Nuclear station workers receive additional exposure, but you may be surprised at just how little.

Radiation is measured in units called rems and millirems. The rem is a unit of measure that takes into account the effect different types of radiation have on the body. A millirem is 1/1000th of a rem.

Just living in the United States exposes us to an average of 620 mrem of radiation annually from natural and man-made sources such as radon gas and medical procedures (Source: Nuclear Regulatory Commission).

It is estimated that if you lived 24 hours a day outside the gate of a nuclear power plant for a year, you would receive less than one mrem of additional radiation. To put this in perspective, a cross-country, round-trip flight exposes passengers to approximately four mrem of radiation.

The Nuclear Regulatory Commission (NRC) allows up to 5,000 mrem of exposure annually for nuclear workers. Duke Energy’s annual limit of 2,000 mrem is less than half of the federal limit. Scientists have observed no health effects from doses of radiation below 10,000 mrem.

“We have extensive maintenance programs at our nuclear plants and spend a lot of time ensuring equipment remains in good working order. A large part of this work is performed in areas where radiation is present,” said Steve Dobbins, Technical Training Instructor at Duke Energy’s McGuire Nuclear Station.

“The RP group’s basic job is to help protect workers by keeping radiation exposure as low as possible and always within regulatory limits,” said Dobbins. He spent 26 years working in McGuire’s RP group and now instructs employees in radiation protection practices and procedures.

In the nuclear industry, keeping radiation as low as reasonably achievable (ALARA) has become a basic tenet of plant operations. In fact, radiation exposure for nuclear workers has trended down over the years largely due to training, technology and a constant emphasis on reducing sources of radiation in the plant.

Sophisticated monitoring equipment located in certain areas of the plant provides real-time information on radiation levels. During pre-work planning, this information is used to help determine the most efficient approach to completing the work while minimizing worker exposure to radiation.

Special mockups of plant equipment such as valves and pumps are used to practice work activities so that workers spend less time and receive less exposure when performing the actual job. Each plant employee wears an electronic “dosimeter” that provides immediate information on their exposure.

Time, distance and shielding represent the fundamentals of radiation protection. Through good planning and efficient work practices, the amount of time a worker spends in a radiation area can be reduced.

At times, remote handling tools and robotics are used to increase the distance between personnel and the piece of equipment being worked on. Concrete shield walls and temporary lead shielding can be used to limit radiation exposure, as well.

“Radiation control areas are identified with signs indicating the radiological conditions. Workers are provided details of all requirements before entering these areas,” said Dobbins. Workers entering these areas must wear appropriate protective clothing to avoid contact with any radioactive “contamination.” Contamination refers to particles of radioactivity deposited where they are not supposed to be.

“We remove most of the radioactive contamination or material by filtration, water chemistry and other methods that reduce exposure to workers,” said Dobbins.

All employees at a nuclear plant receive radiation training and must pass a written exam annually. Nuclear workers participate in accredited training programs that include specific task training and segments on employee health and safety, radiation protection and nuclear security.

“We have personnel contamination monitoring equipment located at the single point used to enter and exit the radiation control areas at the stations,” said Dobbins.

All employees must pass through radiation monitors located at the plant’s exit turnstiles. These detectors provide an additional level of protection to ensure no radioactive material leaves the plant.

“We constantly look for ways to reduce worker radiation exposure,” said Dobbins. “The bar keeps getting raised throughout the industry. It really is a never-ending effort.”

Nuclear Engineers are People Too