Editor's note: This article was originally published on January 30, 2013. It has been revised, updated and republished. 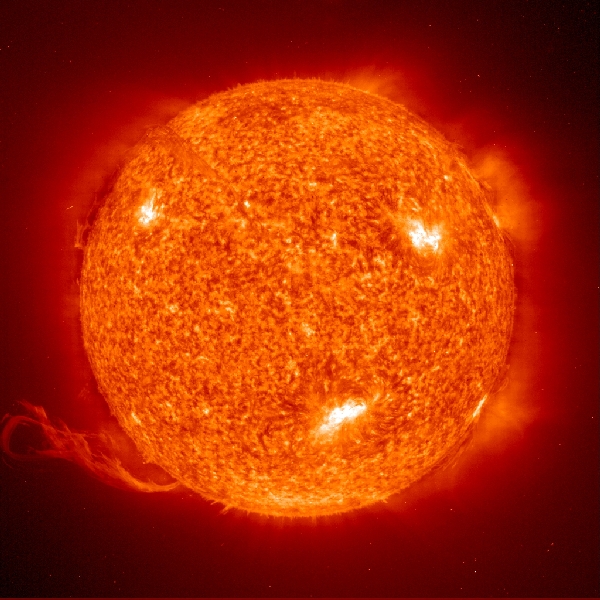 Look up during the day to see one of the most powerful examples of a nuclear reactor: the sun. Inside the sun, fusion reactions take place at very high temperatures and enormous gravitational pressures.

The foundation of nuclear energy is harnessing the power of atoms by splitting apart, a process called fission, or combining them, called fusion. Both fission and fusion alter atoms to create energy, but what is the difference between the two?

Fission, a term coined by scientists LIse Meitner and Otto Frisch, is named after the term “binary fission” in biology to describe cell division. Just as cell’s divide, in fission an atom splits into smaller particles. Fission takes place when a large, somewhatunstable isotope (atoms with the same number of protons but different number of neutrons) is bombarded by high-speed particles, usually neutrons. These neutrons are accelerated and then slammed into the unstable isotope, causing it to fission, or break into smaller particles. During the process, a neutron is accelerated and strikes the target nucleus, which in the majority of nuclear power reactors today is Uranium-235. This splits the target nucleus and breaks it down into two smaller isotopes (the fission products), three high-speed neutrons, and a large amount of energy. This resulting energy is then used to heat water in nuclear reactors and ultimately produces electricity. The high-speed neutrons that are ejected become projectiles that initiate other fission reactions, or chain reactions. 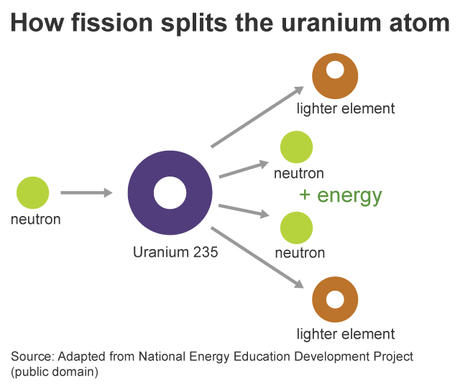 Conversely, fusion takes place when two low-mass isotopes, typically isotopes of hydrogen, unite under conditions of extreme pressure and temperature. Atoms of Tritium and Deuterium (isotopes of hydrogen, Hydrogen-3 and Hydrogen-2, respectively) unite under extreme pressure and temperature to produce a neutron and a helium isotope. Along with this, an enormous amount of energy is released, which is several times the amount produced from fission. 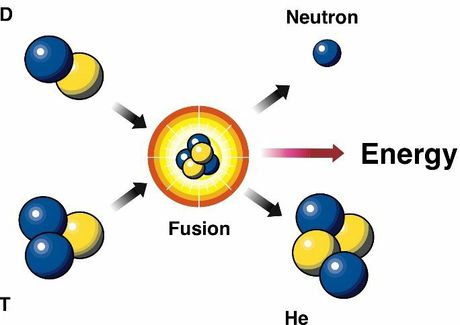 While fission is used in nuclear power reactors since it can be controlled, fusion is not yet utilized to produce power. Some scientists believe there are opportunities to do so. Fusion offers an appealing opportunity, since fusion creates less radioactive material than fission and has a nearly unlimited fuel supply. These benefits are countered by the difficulty in harnessing fusion. Fusion reactions are not easily controlled, and it is expensive to create the needed conditions for a fusion reaction. However, research continues into ways to better harness the power of fusion, but research is in experimental stages, as scientists continue to work on controlling nuclear fusion in an effort to make a fusion reactor to produce electricity.

Both fission and fusion are nuclear reactions that produce energy, but the processes are very different. Fission is the splitting of a heavy, unstable nucleus into two lighter nuclei, and fusion is the process where two light nuclei combine together releasing vast amounts of energy. While different, the two processes have an important role in the past, present and future of energy creation.

Seven climate definitions that will impress your friends