There are approximately 166 million people in the United States who play video games, according to the Entertainment Software Association. With so many gamers in America, there are sure to be gamers who have “day jobs” working in nuclear plants. For future nuclear professionals, some of the very same skills you develop playing video games can be put to work in nuclear plants.

Current research shows there are some cognitive benefits from playing video games, such as improved hand-eye coordination. This is no surprise, since accomplishing a task in a game requires players to exercise fine motor skills (slight hand movements) at the controls to respond to what they see and hear onscreen. These same coordination skills are needed within many positions at Duke Energy.

For example, robots have proven their worth in the nuclear industry for strengthening personal and operational safety. One such application is robots inspecting dry fuel storage cannisters. These canisters are robust containers for storing nuclear fuel after it has been removed from used fuel pools. Like a gamer playing a video game, the controllers operating the robots have to respond to what they are seeing when maneuvering the robot.

Another benefit of the video game culture in the nuclear industry is its application to training. For our nuclear plants, the technology of virtual reality is further enhancing the training of our nuclear professionals.

Duke Energy’s metrology group uses laser equipment to image plant systems and components, allowing them to capture the interior of hard to access locations, such as the reactor building, in a virtual environment. Without experiencing this in virtual reality, workers would have to don layers of protective gear to enter certain areas for tasks as simple as taking measurements. With this technology, people can walk into the reactor building virtually and complete some tasks without even leaving the office. Likewise, in preparing for a job in this area, a person who has never ventured into the reactor building can orient him or herself to the environment. That familiarity can lead to more efficient and safer work when they head into the field. As this practice becomes more and more common, the need for workers already adept at exploring digital worlds only grows. It’s an opportune time to be a gamer entering the workforce.

Any casual player knows that engaging in a video game requires attention. What some studies are beginning to show is that certain types of first-person video games help improve the attention of players and help individuals become more adept at filtering out unneeded information in completing whatever task is at hand. While this is a benefit in games, researchers suggest these findings may also extend beyond the screen into the real world. Workers with greater attention abilities in complex environments seem to be tailor made for the nuclear industry.

One application where greater attention to detail and dexterity are necessary is in the emerging use of drones in the nuclear industry. Indoor drones provide a way for our nuclear workers to perform tasks more efficiently and safely. For example, Duke Energy nuclear workers are using indoor drones to perform inspections in confined spaces. By deploying indoor drones, a trained pilot can use its high definition video and infrared camera to capture the necessary footage down to the very last bolt. The pilot can then send the footage back to others for review. The drone pilot must be adept at the controls for maneuvering the drone in flight, but also needs to have the ability to focus on the task at hand and filter out what’s unimportant in the surroundings to make a thorough inspection. It’s a skill unfamiliar to many, but commonplace to a gamer. 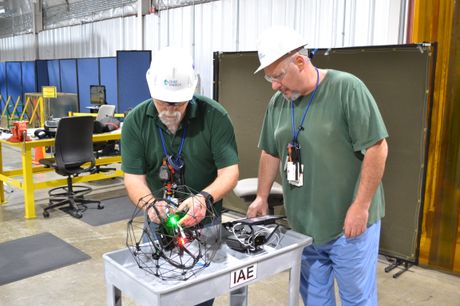 Working with an indoor drone

Video games have become more and more a central part of our lives. The skills video games provide players help position them for important careers in the physical world. So, the next time you pick up a controller and head to another world, you might be boosting your resume in the real world and preparing yourself for a career in nuclear energy.

Posted July 19, 2019 by Shawna Berger
Thank you for your interest. Please check out https://www.duke-energy.com/our-company/careers for open positions.
Posted July 18, 2019 by Adhil Sabak Panolan
This is a positive news for video game players like me . ✌️✌️✌️
Posted July 16, 2019 by Matt
If you need a gamer let me know! Current engineering PM and long time gamer that would love to work for Duke.

Look to nuclear for a unique and exciting career in energy

Their internships: nuclear energy and innovation

How Kim Maza has excelled in a technical world