After two years of construction, the Keowee-Toxaway Visitors Center – now known as the World of Energy – opened its doors on July 1, 1969. Among the 250,000 visitors to the Center in its first year was Tim Pettit, who was on a school field trip with his fellow fifth-graders. Twenty years later, Pettit started his career there in corporate communications.

“I think for any of us that ever worked at the World of Energy, it was such a special place. It’s setting, on the shore of beautiful Lake Keowee, and its open architectural design made it so inviting,” Pettit recalls of his time working there.

From the architecture and scenic surroundings to the many historic and memorable events, the World of Energy holds a special place in the hearts of many former staff members like Pettit.

“There are wonderful memories of my wedding reception and baby shower that were held there,” says Debbie DuBose, the education center’s manager from 1975 until 1985.

The Keowee-Toxaway Visitors Center was built to educate the public about the Keowee-Toxaway Project, which launched in 1965. The project included Duke Power’s first nuclear plant, Oconee Nuclear Station, and a pumped-storage hydro plant. Bill Lee, Duke Power’s vice president of engineering and construction in the late 1960s, is credited with much of the vision behind the award-winning visitor center.

Angie Howard was the assistant director in 1970; during her time there, three men came into the facility to ask about filming. 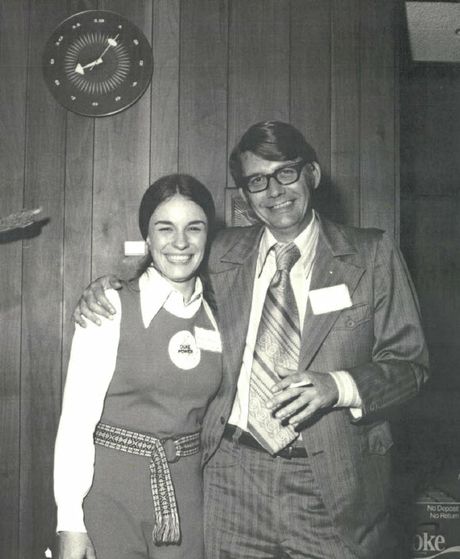 “They told me they were doing some filming for a movie and wanted to talk about filming the construction work and on Lake Keowee,” Howard said. “Having just finished reading the book ‘Deliverance,’ by South Carolina author James Dickey, I replied to them during the conversation that it sounded like they were filming ‘Deliverance.’ Well, their stunned faces gave them away, and they asked how I knew that was what they were doing. I replied, ‘I just finished reading the book.’ Duke Power cooperated and allowed the filming. When the film crew shot scenes at the Keowee Dam, our staff had the pleasure of hosting Jon Voight and others – Burt Reynolds had finished his role and wasn’t on that shoot – at the Visitors Center and telling them a bit about nuclear energy.”

Pettit recalls an encounter with Lee, who went on to become the company’s chairman and president, while working at a Duke Power board meeting hosted at the World of Energy in 1991.

"I had the assignment to take the spouses on a tour of Lake Keowee. Taking my job seriously, I had mapped out a plan to hit all the waterfalls and other scenic points of interest on the lake, but after about the second waterfall, Mrs. Lee asked me to show her some of the residential areas on the lake and waterfront properties.

Later that evening at the board dinner, Mr. Lee walked up to me and asked me about the boat tour. Naturally, I explained how a great time was had by all, and that’s when Mr. Lee looked at me and raised those famous bushy eyebrows and said, “Timmy, son, I’m sure they did, but if my wife makes me buy that piece of lakefront property you showed her, then you’re going to have to find some other place to work in the company.”

It was that same weekend that Oconee Nuclear Station Unit 1 became the first nuclear unit in the country to generate one billion megawatt-hours of electricity -  just one of its many accolades." 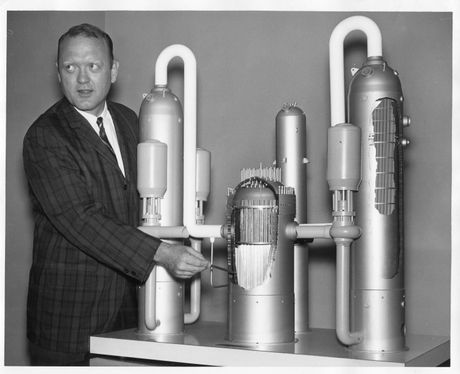 Bill Lee with a Babcock Wilcox pressurized water reactor model that is now part of the World of Energy exhibits.

Besides company employees, many community members have hosted meetings and attended events at the World of Energy since it opened in 1969. In fact, from school groups to industry leaders, more than three million visitors have walked through the World of Energy’s doors to see its ever-evolving energy education exhibits.

DuBose vividly remembers one school group who visited during her tenure at the education center – a time she fondly refers to as “the day a man chased me around the World of Energy wrapped in a large snake.”

Several school groups were at the education center one spring day and students found a snake on the sidewalk. Before Dubose knew it, their teacher was headed to the World of Energy desk “with that enormous black snake wrapped around his arm,” Dubose said.

“We had a kindergarten group in the auditorium and all I could think to do was to run into the darkened theater and crouch down among those little children to hide.”

“That Saturday, I was on duty, and we had a group of Boy Scouts in the lobby. The media was there, and asked some of the Boy Scouts and other visitors if they had concerns about Oconee Nuclear Station, and they all said ‘No, not all.’ That was such a moment to me, that the relationship we have with our local community is so important.”

Posted June 25, 2019 by Tina Kuhr
My favorite World of Energy memory is the 2017 Solar Eclipse viewing party they hosted. People from all one the Southeast came to view the event. The staff and Duke Energy volunteers made everyone feel welcomed.

Fission vs. Fusion – What’s the Difference?