Rethink for just a minute what you know about nuclear energy. Set aside the idea that nuclear energy can only be produced at highly engineered nuclear reactors with multiple, redundant safety features. 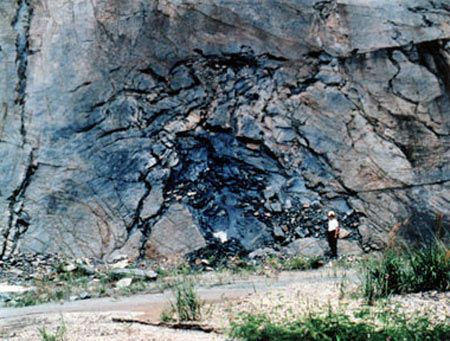 Site of the Oklo natural nuclear reactors in Gabon. Photo US DOE.

Instead, visualize the hilly region of Oklo, Gabon, a West African nation bordering the Atlantic Ocean. The time frame is approximately two billion years ago, and at least a billion years before the first dinosaurs appeared.

In this prehistoric time and place, Gabon’s rich uranium ore deposits, combined with the air and groundwater, became nature’s nuclear reactors. Scientists have studied this region since the 1950s and believe nuclear reactions occurred sporadically for millions of years as water boiled away from the uranium ore only to restart as fresh water flowed into the deposits.

To understand how a nuclear reaction could occur spontaneously in layers of mineralized uranium and sandstone, let’s take a closer look at a nuclear reaction or the “fission process.” All mater is composed of atoms with an atomic structure of protons and neutrons forming a nucleus, with orbiting electrons.

However, certain elements like uranium can have a less stable atomic structure. A uranium 235 atom (U235) has an equal number of protons and electrons, but an unequal number of neutrons. This additional neutron makes the atom unstable, causing it to release the neutron, generating thermal energy as it decays into a more stable form.

A nuclear fuel core consists of U235 submerged in water inside a nuclear station’s thick steel reactor vessel. As a neutron is freed from a U235 atom, the water slows it enough to collide with another U235 atom, causing it to fission or split apart. Heat is released as a byproduct. Plant systems safely control the fission process so this heat can be used to produce steam in a non-nuclear system for the generation of electricity. 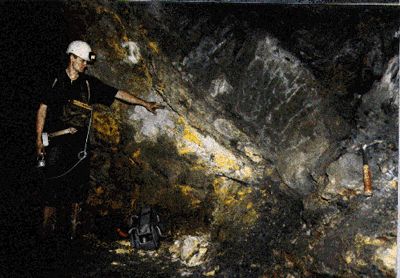 This picture shows one of the remaining Oklo Fossil Reactors, it is accessible through a tunnel from the main mine workings. Photo US DOE.

Uranium represents a common element in the earth’s crust, but less than one percent is U235. For use in a nuclear reactor, the concentration of U235 must be enriched to about three percent through a chemical process. Scientists have determined that Oklo’s uranium deposits consisted of approximately three percent U235 billions of years ago, the same enrichment found in today’s commercial nuclear reactors.

A total of 16 reactor zones have been identified at the initial Oklo site and another 20 reactor zones in Bangombe. Because of the nuclear fission that occurred here two billion years ago, the existing uranium ore in these zones contain less U235 than other areas of the region (less than half a percent).

Byproducts from the fission process can be traced back to these spontaneous episodes of nuclear fission that occurred in this area. These radioactive byproducts have decayed over time, providing a case study of how radioactive elements interact with the environment before reaching a stable state.

In many ways, the uranium deposits at Oklo serve as an example of a “natural” long-term geological repository of nuclear wastes. Scientists continue to study these ancient nuclear reactors and their observations have provided valuable insights into the requirements for long-term storage of nuclear waste.

These natural reactors had the perfect geology and shape to sustain and regulate the fission process, providing a glimpse into our distant past and demonstrating nuclear fission well before Enrico Fermi and his colleagues achieved the first controlled nuclear reaction in a test reactor 80 years ago.