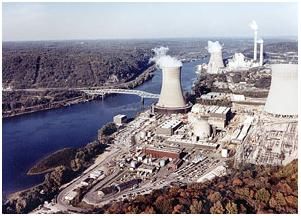 Shippingport power station was the first commercial nuclear power plant in the world.

In the post-World War II era, the Atomic Energy Commission was created to explore peaceful opportunities for the same nuclear materials the U.S. used in Japan at the end of the war.  Now almost 70 years later, there are 104 nuclear reactors harnessing that same power of atomic fission to meet nearly one-fifth of the U.S.’s commercial energy needs.

The U.S. Navy led the way with ventures in nuclear electricity generation soon after the war.  The year 1957 would see the country’s first commercial generation of nuclear power at the Shippingport Atomic Power Station as part of President Dwight Eisenhower’s Atoms for Peace program.  Operating on the Ohio River under the Duquesne Light Company, Shippingport reliably supplied nuclear energy to the Pittsburgh area for 25 years before being retired in 1982.

Shippingport broadened opportunities for atomic research and paved the way for new nuclear plant construction.  Forty-six nuclear reactors were commissioned around the country in the 1980s alone.  By the time of Shippingport’s decommissioning in 1989, 109 nuclear reactors were generating about 19 percent of the nation’s electricity, becoming the second-largest power source in the U.S., with coal still the frontrunner.

The construction of new nuclear plants slowed drastically after the 1980s, as demand for new units fell and nuclear opposition grew around the country.  The events at Three Mile Island (Pennsylvania) and Chernobyl (Ukraine) in 1979 and 1986, respectively, raised concerns about the safety of nuclear power and fueled anti-nuclear dissenters.

The U.S. nuclear industry has since proved that nuclear energy is a safe and reliable power source.  One hundred and four nuclear reactors currently operate in 31 states, generating about 19 percent of electricity in the U.S., including more than 70 percent of the nation’s carbon-free electricity.  The total U.S. nuclear production amounts to more than 800 billion kilowatt-hours as the third-largest electrical energy source behind coal and gas.

Despite fears raised by the events at Fukushima Daiichi in Japan last year, there are at least four new nuclear units expected to be commissioned in the U.S. by the end of the decade.  These include two new reactors at Southern Co.’s Vogtle plant in Georgia and two new units at South Carolina Electric & Gas and Santee Cooper’s V.C. Summer plant.  These new reactors are among the country’s first to be approved by the NRC in over 30 years.  Read more about them here and here.

Moving forward after the approval of these new licenses, the U.S. looks forward to a nuclear energy renaissance.

Shippingport power station was the first commercial nuclear power plant in the world.

echnicians watch the reactor dome being lowered into place by crane over the reactor pit which was under construction in 1957 at the Shippingport Atomic Power Station in Pennsylvania (Courtesy of LIFE Magazine’s Archives).

Tourists pose next to the sign outside the Shippingport power station.

It's no secret Duke Energy has plans for a reliable, affordable, low-carbon future. How? 🤔 By keeping nuclear ener… https://t.co/7Qp71sHhdf