For McGuire Nuclear Station’s Christie Bristow, being organized and confident about the decisions you make is the name of the game. And as McGuire’s work window manager, where preparation and execution are key, Christie doesn’t take that responsibility lightly. “Managing risk and developing solutions are major tasks to bear,” Christie says. Showing up for work each day means new challenges and ensuring daily activities are scheduled in a manner that supports the safe operation of the plant and those working in it.

When it comes to handling multiple projects and activities there’s a lot of coordination and communication on her part, sometimes requiring weeks of preparation, follow-up and critical decision-making. It’s all about “staying on top” Christie says. Whether it’s tracking the progress of daily work activities or scheduling a few thousand work activities for an upcoming refueling and maintenance outage, Christie always has to remain focused. Nonetheless, it keeps her on her toes and she welcomes the challenge. 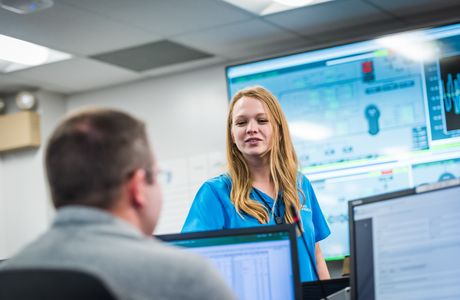 For Christie, her determination and grit are derived from her parents. At a young age, she and her two siblings witnessed their mother and father serve as models of what hard working parents were all about. They instilled in their children the importance of education and personal values. From as far back as she can recall, Christie has memories of her dad working as a senior leader specializing in communications and market research for hospitals across the country. Christie says, “seeing how driven he was day in and day out” was inspiring and motivated her to recognize that the “sky was the limit” when it came to her career goals.

Christie could’ve grown up to be a marketing strategist guru like her dad, but instead she turned to math and physics and knew she wanted to go to college and major in engineering especially after her high school physics teacher told her “it was okay for a female to purse a STEM-related career path.”

She took that unwavering confidence embedded in her as a young child, and a few years later Christie did just that. Her passion for engineering turned into obtaining a Bachelor of Science degree in Mechanical Engineering from Clemson University and Master of Science in Energy Systems from Northeastern University.

During her freshman year of college, Christie chose an internship with Constellation Energy Nuclear Group in Baltimore, Maryland. Her experience interning for the fuel supply group is what sparked her interest in nuclear power. “Being able to tell my family and friends that I ordered uranium on a daily basis was so neat to me at the time.” It was then that Christie developed a strong interest for nuclear energy and realized she wanted to turn this passion into a career. After a few more internships within the nuclear industry, Christie landed a co-op rotation with Duke Energy.

Christie credits her co-op experience with Duke Energy as the ultimate foundation for developing her career at McGuire Nuclear Station.

As she looks back and thinks about where she is now, there’s something that always stands out in her mind. Going through college classes and internships, Christie was always the oddball - which she openly welcomed and embraced. In fact, one of Christie’s earliest and ironically favorite college memories, is when she entered a 95-person engineering class and was only one of four women in the class. 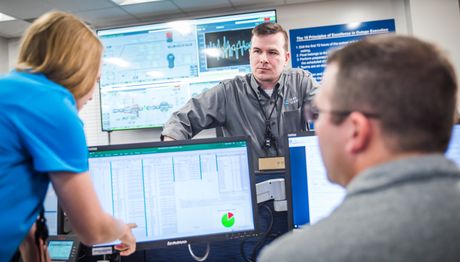 Rather than shy away from this, Christie looks back now and thanks her parents. It’s because of them that she was able to turn this situation into a positive one. In fact, Christie says she’s grateful to have gone this experience because it made her stronger and even more confident as she transitioned from college into the workplace.

It’s no secret that less than 20% of women make up the nuclear workforce. But in Christie’s case, she’s seen an increasing number of young women choosing to work in the nuclear industry since she first started at McGuire in 2014 as a co-op student. “I am by default, a role model to young women. I understand that being “the one who’s not like the others” makes for some awkward moments, but embracing it is what makes us powerful!

Ask Christie and she’ll proudly tell you “the sky’s the limit” when it comes to her career in nuclear power. “Every day for nearly 40 years, McGuire Nuclear Station employees have been improving the lives of its customers by providing clean, safe and reliable energy and I want to continue to be part of that tradition.”

Posted December 04, 2020 by Jody Porter
Great story. Thank you for sharing. I'm a huge fan of Christie and the role model that she is for young women in the nuclear fleet. I'm very proud of the women we have working in and leading this organization.

Can we hear it from a professional?

It's not like the movies - working in nuclear energy