Valentine’s Day is traditionally the time we reserve for hearts, candy, cupid’s bow and arrow and all things love. We also know that love takes on many meanings and is expressed in a variety of ways.

In a world with electricity generated by nuclear power, love is in the air, 24-7-365. The love never goes away, in fact it grows more and more every day. As the nation’s largest source of carbon-free electricity, it also loves the planet in which we live. 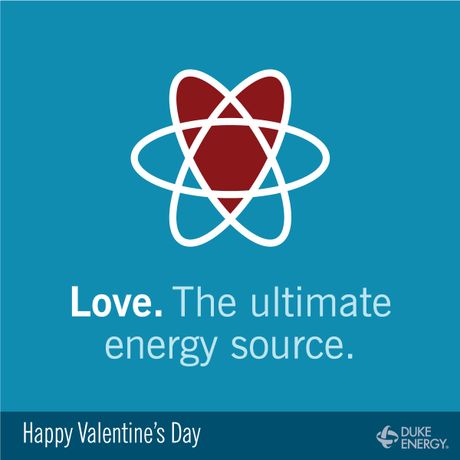 However, one of Merriam-Webster’s definitions of love suggests that it is a “warm attachment, enthusiasm or devotion” to something, and who better to help us understand this version of the definition more than our very own nuclear professionals. We asked a few of our nuclear professionals about their love and passion for the industry and how they knew nuclear was a “love at first sight.”

For Jack Lemmer, a love of science fiction at an impressionable age drew him to a nuclear career, where he has worked as a probabilistic risk engineer for the past four and a half years.

“The more I learned about science, the more I saw the unique benefit of nuclear,” he said. “Once I entered the industry, I got to see the quality of people it attracted and I haven’t looked back since.”

The future of nuclear is what keeps Jack’s interest, especially knowing that nuclear is the only technology that offers clean, reliable energy when needed. “I want to be a part of keeping nuclear a key part of the energy portfolio of the future,” he said.

Since her days of middle school environmental science, McGuire Nuclear Station employee Rebecca Petrea, knew that nuclear would be a match for her in the years to follow simply because she wanted to do something to help the planet. “We’re only given one of them, we need to take care of it,” she said.

Rebecca started as a Duke Energy intern in 2015 and was hired full time in 2016 as a reactor engineer, where her passion for the industry thrives. When asked how she knew it was love, she recalled the first time she got to help with a startup. A startup is the process in which the fission process used to make electricity, begins within the reactor. From receiving new fuel for the next cycle, having the opportunity to touch fuel assemblies, to seeing improvements in areas she works on, the journey thus far has been blissful.

l just remember thinking, WOW, this is so cool that this is my job right now," she said.

“I just remember thinking, WOW, this is so cool that this is my job right now,” she said.

Like Rebecca’s path to discovering nuclear, Oconee Nuclear Station employee Brandon Stem, also knew nuclear was the one for him when he realized he could combine his love for the environment with his career. When asked if he chose nuclear or did it choose him, Brandon felt it was a mutual connection. However, the spark occurred after he listened to a nuclear podcast, which led him to pursue everything about nuclear energy. From there he wrote a speech on why nuclear matters for a speak-out competition at Clemson University, where he received his undergraduate degree in electrical engineering. “From there it just kept going. I applied for an internship at Catawba Nuclear Station and got accepted,” he said.

Having been at Oconee for the past three years, the spark continues for Brandon. He attributed this to having the opportunity to spread nuclear love by giving back to the community through his North American Young Generation in Nuclear (NAYGN) chapter at Oconee. NAYGN is an outside organization that provides opportunities for young nuclear enthusiasts to develop leadership and professional skills, networking and engagement with the public. All things which are critical to the success of nuclear generation as operating licenses are extended. It’s through engagement that Brandon finds his proudest moments in nuclear. He finds it rewarding to be able to make the topic of nuclear fun for students. “Laughter is a great teacher and by seeing the students laugh, I know they’ll remember what we talked about and that we’ve made an impact.”

Mahatma Gandhi said, “where there is love there is life.” This certainly rings true across Duke Energy’s nuclear fleet and the employees whose passion for it sustains its life and provides loveable energy for millions of customers, not just on the day of love, but every day.

Posted February 14, 2020 by Parag Meshram
Nuclear energy is the only relatable source left to human race. Like all above mentioned I’m too nuclear passionate, duke energy is doing great work. Hats off to all duke energy employees

How a life of adventure pairs with nuclear energy

During #EngineersWeek, @RoperMountain brought air to life during a Science on Wheels program at the World of Energy… https://t.co/A6UPaLaxGC