Maza’s nuclear energy career almost didn’t happen. But, thanks to a recession, she found her true calling.

During the summers while attending The Ohio State University, Maza interned at a petroleum company in Louisiana and was one of the first women to work on an oil rig. This supported her academic major in chemical engineering and minor in petroleum engineering. After graduation, Maza was elated at receiving an offer to work for the oil company and was excited for this unique opportunity, but the company rescinded its offer shortly after extending it – blaming the recession.

Maza returned home to New Jersey and sent resumes to several oil companies, while working a few temp jobs, including as a substitute teacher. The Hope Creek Generating Station was under construction in Salem County, N.J. and Maza met a few of the construction workers at one of her temp jobs. One offered to take her resume to the new nuclear plant, and that’s when she landed her first job in nuclear energy – a chemistry technician at Hope Creek.

Maza enjoyed the hands-on application of science and was drawn to chemistry in high school. Growing up in New Jersey in the shadow of a large chemical plant whose employees were actively engaged in chemistry classes hooked her on chemistry, and then chemical engineering.

While in college, Maza realized she needed to be tenacious in learning and not let any course or grade define her. She threw herself into the engineering program and decided not to let detractors who thought engineering was not for women take her energy, rather she was determined to let her accomplishments speak for themselves.

She used that energy and determination to work her way up to leadership positions at Hope Creek in both the chemistry and radiation protection groups by focusing on the things she could control. She ensured she was prepared for meetings, remained focused on all aspects of work assignments and contributed something of value to interactions. 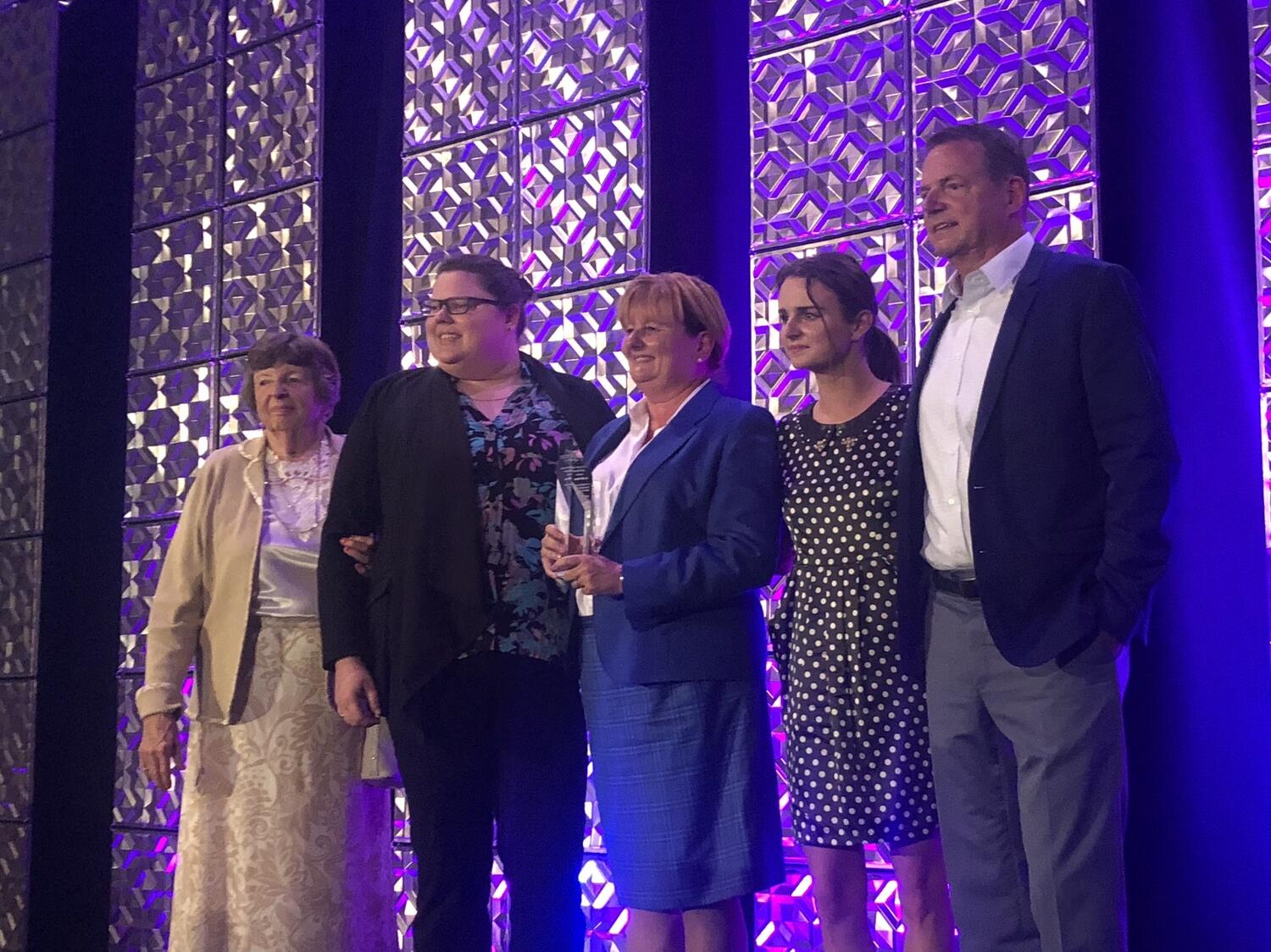 Kim Maza with her family at the Women in Nuclear 2019 Conference where Kim was honored with the Leadership Award.

She also learned that balance is important both professionally and personally. Maza saw her parents successfully commit to their family, as well as their careers. They showed her that while family and career can co-exist, some things may end up less than perfect. Maza shared her house wasn’t always meticulously clean (unless the in-laws were visiting), her children could help with laundry (and survive an unexpected pink wardrobe) and healthy meals could come from cans. In fact, less than perfect in some cases allowed her family to make great memories.

As Maza’s three children grew and thrived, so did her career. She left Hope Creek to join the Institute of Nuclear Power Operations (INPO), whose mission is to promote the highest levels of safety and excellence in nuclear operations, where she held senior leadership positions over workforce training, education and proficiency, and performance monitoring. She supported operational excellence programs at nuclear power plants across the nation, while also engaging with employees and advocating for nuclear energy.

Her dedication to the industry has not gone unnoticed. Maza recently received the 2019 U.S. Women in Nuclear Leadership Award for her distinguished career in the nuclear energy industry, where she has been a champion not just for women working in the industry, but all employees.

Maza is very thankful for her opportunities in the nuclear industry and credits her family and mentors who have all consistently encouraged her to take positions outside her comfort zone. She says that while no one can really have it all, you can have what is most important in life – a family that is happy and thriving, and a successful career.

Even if it’s a career that almost didn’t happen.

Posted March 12, 2020 by Forrest Mixon
Kim, Marion, Ruth & I are so proud of you!
Posted February 05, 2020 by John Dwyer
I worked with Kim at Duke Energy and INPO. She is a great leader and a fantastic person! The nuclear industry is blessed to have people like Kim!
Posted August 27, 2019 by Sheila Rogers
I have known Kim for many years. In my role as Fleet INPO APOC for Progress and now Duke, I have had the opportunity to see her leadership in action at INPO. I am beyond excited to have the opportunity to work for Kim now at Duke. She is an inspiration to all, but especially women in the nuclear industry. I cannot think of anyone more deserving of this outstanding award than her and so happy I could be at the conference when she received it. Congratulations Kim!!
Posted August 27, 2019 by Donna Longwith
I was very proud to be in attendance to help celebrate and congratulate Kim Maza on her 2019 U.S. Women in Nuclear Leadership Award. You are a great role model and mentor for us all in Women In Nuclear and on the Duke Energy Teams! Thank you for sharing your story.
Posted August 27, 2019 by Dave Mason
Enjoyed the story and it has been an inspiration watching your career grow to where you are today.....I remember that first day you walked in at Hope Creek!! Congrats on it all!!
Posted August 26, 2019 by ShanaW
Excellent story of trial and triumph. Inspirational story, Maza. Thank you for sharing.