It was 1969. The Beatles staged their last public performance. The Boeing 747 debuted. The average income was $8,550. Apollo 11 landed on the moon. The first ATMs and battery-powered smoke detectors were produced.

And two months before Woodstock, an 18-year-old graduated from Charlotte’s West Mecklenburg High School on Wednesday, went to work for Duke Power the following Monday as a junior designer.

Forty-eight years later, Mike Wesson is a senior nuclear engineering technologist at Catawba Nuclear Station. He’d like to make his 50th service anniversary – long enough to have a building named for him – he jokes.

“I’m enjoying what I do,” says Wesson. “It’s challenging but I learn something new every day. That’s what’s kept me here.”

Duke recruited Wesson before he even graduated high school. “They came to my school and said, ‘Anyone interested in working for Duke Power can go to Garinger High School and take a test,’” he recalls. “So I went to Garinger and took the test, and they called me for an interview.”

Wesson spent his first six months in a drafting class before moving to a group that designed switchyards for the company’s planned nuclear plants. (Wesson actually designed the switchyard at Catawba.) “No one in my family worked in nuclear, so I knew nothing about it. I barely knew anything about Duke Power” Wesson says.

After 10 years as a designer in the switchyard group, he held several positions including one designing commercial facilities such as office and medical buildings. Wesson remembers when the design engineering group had 60 people and held Christmas parties at former Duke Power President Bill Lee’s house. 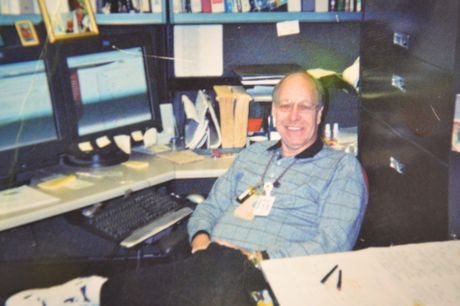 In the mid-1980s, he performed contract work for other companies through Duke Engineering and Services (DESI) at Harris Nuclear plant and Plant Vogtle. When he returned, he joined the group designing Catawba Nuclear Station and worked in uptown Charlotte until 1992.

Wesson recalls the day he was asked to move to Catawba Nuclear Station. “I had just gotten a parking space under Duke Power’s building, right next to the elevator. I had it for a month before I was sent to Catawba in February 1992. I’ve been here ever since.”

He started in lighting and communications, moved to auxiliary feedwater system design, did planning and planning work orders, installed rectifiers for generators and designed protective relaying and security modifications. Today, he still designs and plans.

As with most folks who’ve been around a long time, Wesson sees both positives and negatives in the years he’s been with Duke. “The plants are more efficient,” he says, remarking that Catawba has operated at or above 95 percent capacity for several years. “The plants continue to run well with preventive maintenance and equipment replacement. We’re doing a good job of taking care of the plant.”

There are many more procedures than when he first started, Wesson explains, although hand-written records have been replaced by digital ones. But technology is something he embraces. “We’re installing new remote sensors to make sure the equipment is running properly,” he says.

For Wesson, coming to Catawba was the best thing that ever happened to him. He felt he had more to offer and working at the plant provided him with new opportunities to grow professionally. He particularly enjoys being able to see his design work in action. “I can be right where my design is to ensure it’s being installed properly and working the way it’s supposed to.”

While Wesson remains bullish on nuclear, he’s worried about its future. “We need nuclear: when the polar vortex came through, you couldn’t get coal or gas for the plants, but nuclear chugged along the whole time. Nuclear is good for the economy and keeps our carbon footprint down,” he says. “It’s a mistake to close down all these plants – and not just because I work at one. Duke doesn’t put production before safety. I’d like to think other companies are the same way. Nuclear is safe.”

Posted April 25, 2018 by Haydn Rugg
Hats off to Mike for his historic career. I wish more companies would motivate high school students like they did back in the day. Students today are being pressured to go to 4 year schools and take on tremendous debt and still have trouble landing jobs afterwords.
Posted April 11, 2018 by Duke Energy
Jim, our nuclear fleet employs people with varying educational backgrounds and skill levels. Many of our workforce development efforts are in conjunction with colleges including partnerships with community colleges and summer internships.
Posted April 10, 2018 by Jim Brumm
Does Duke offer similar opportunities to high school graduates today? Or does the company expect someone else to train its workers?
Posted April 10, 2018 by Daniel Robinson
I enjoyed reading the article. I got a lot of insight at what Mike has done and his contributions over his 48 years at Duke energy. Congrats to you Mike, and I hope you make your goals.
Posted April 05, 2018 by Charles Creel
Worked in same group as Mike for several years. He is as passionate about his work as this article states. Keep up the good work and congratulations Mike.
Posted March 28, 2018 by James E Herrington
Worked with Mike during my years with Duke in Design Engineering Electrical and for 18 years at Catwba Modification Engineering Electrical. Wish him the best in his goal to make 50. Congratulations on your ride.