No matter what your job is, chances are you had some help getting to where you are today. Something as simple as offering advice to a friend or co-worker can make a difference in a person’s career. In the nuclear industry, mentoring not only helps individuals grow as professionals, but also serves as an effective way to transfer complex technical knowledge.

In fact, mentoring is so important to Duke Energy’s nuclear fleet that North American Young Generation in Nuclear (NAYGN) members at Harris Nuclear Plant created a program to formally recognize mentors. The SENSEI Program – which stands for Seasoned Employee/Non-Seasoned Employee Interface – recognizes experienced employees who go above and beyond to positively influence their less experienced peers. 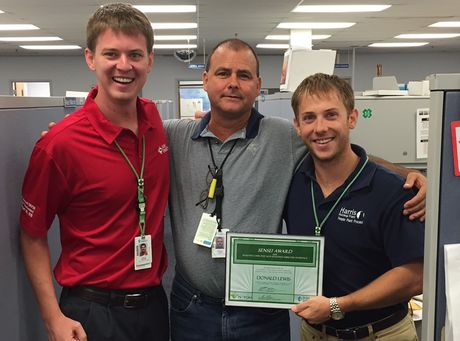 Each quarter, NAYGN members nominate mentors who have helped them learn about a particular project or area of expertise. Elliott Wilson, a senior nuclear engineer and NAYGN leader at Harris Nuclear Plant, explains the impact his mentor, Daryl Hughes, has had on his career. “Daryl has gone out of his way to help me learn and progress within my field, seismic design. When I ask a question, he will routinely put aside his work and help me to understand not only the answer, but also the why and how.”

Since the program’s inception in 2015, Harris has named 20 SENSEIs, including winners from virtually every department. NAYGN and site leadership formally honor mentors with an award, a polo shirt – which award-winners frequently sport – and recognition lunch. Although the tangible rewards are small, the program has a significant impact on the award-winners. “I was honestly taken aback by the impact the awards have on the workers,” said Wilson. “I’ve seen people choke up upon receiving an award. The subject is really just that important to people.” 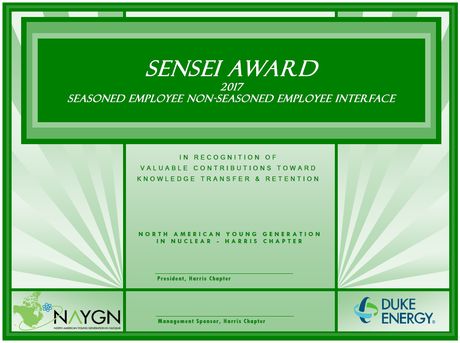 In 2017, the SENSEI award program was expanded to include all of Duke Energy’s nuclear workers at six plants and at the company’s headquarters in Charlotte, N.C. Although the specific details of the program differ by site, the goal remains the same – to recognize and thank mentors for the positive influence they have on their mentees.

The broader effect of the program has been to encourage more senior employees to help their less seasoned colleagues gain the valuable knowledge and experience to ensure Duke Energy’s nuclear fleet continues operational excellence. Such knowledge transfer leads to error-free work, workload reduction and a more engaged workforce.

Currently, Duke Energy’s NAYGN chapter is unique in offering a mentoring recognition program like SENSEI. However, the chapter has plans to share its success with the broader NAYGN organization in 2018, with a goal of creating a national award program that recognizes nuclear employees from across North America. “Hopefully, other chapters will embrace this and see the same positive impacts on their organizations,” said Wilson.