How do advocacy, education and technology work together to advance the message of nuclear energy? Well, there’s an app for that.

The team at Generation Atomic is working hard to improve the public’s perception of nuclear energy both inside and outside the industry. They are amplifying and augmenting the nuclear advocacy efforts through a variety of ways. The Generation Atomic app is central to its efforts.

What is unique about Generation Atomic is that it is a dual organization. It is both an education/training organization and a movement – grassroots advocacy. Through grassroots efforts, the team is currently focused on advocating for existing nuclear. On the education/training front, members are working to expand the nuclear community, advance technologies and articulate a vision for how important nuclear energy is for the future.

“This makes us a versatile and valuable actor in nuclear energy space,” said Eric Meyer, co-founder, Generation Atomic. “Our mission is to energize and empower today’s generation to advocate for a nuclear energy future. We articulate a vision for how good the future can be with more nuclear, while also highlighting the importance of today’s fleet and giving people the tools to make that a reality.”

How does an app fulfill this mission? The app is like a Leatherman tool – it’s multifaceted. It is both an advocacy and an educational tool. Generation Atomic uses the app as a canvassing tool. It has replaced clipboards as the team goes from neighborhood to neighborhood to spread the word about nuclear energy. However, the interaction doesn’t stop at the front door. The app is used to educate those who have downloaded it and are interested in nuclear energy and advocacy. It contains nuclear energy facts, quizzes and videos. 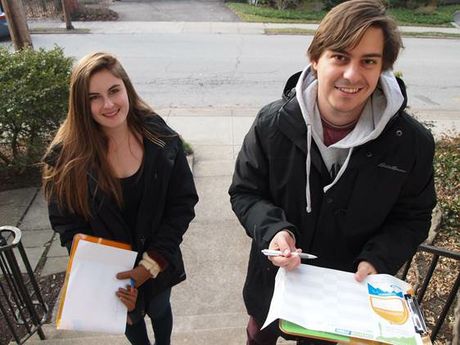 The app is being used by Women in Nuclear and North American Young Generation in Nuclear members. This allows members of both organizations to be advocates and tell their stories.

“We also have to show the human face behind technology. People want to connect and be motivated by the people behind the app,” said Taylor Stevenson, co-founder, Generation Atomic. “We are using technology to change the hearts and minds of people about nuclear energy.”

Stevenson adds, “We are a little bit like the A-Team. We take on special assignments. We want to be a group of people that says it’s OK to be a nuclear advocate. We are using technology to do that – to be in the trenches and tell the nuclear story.”

Generation Atomic is launching a national advocacy campaign this fall where the team will focus on nuclear energy at the state level. If you would like to get involved or download the app, please visit the Generation Atomic website.