A 3D modeler, a nuclear engineer and an operations training technician walk into a classroom. No joke, it happens more often than you might think. Many nuclear workers at Duke Energy volunteer to educate community members about the benefits of nuclear energy and how nuclear power plants work. But why would highly trained and skilled workers spend time attending science fairs and scout meetings?

In honor of Nuclear Science Week – a week-long international celebration of the nuclear industry – we asked three members of the Duke Energy nuclear workforce to explain why they’re dedicated to nuclear energy advocacy. 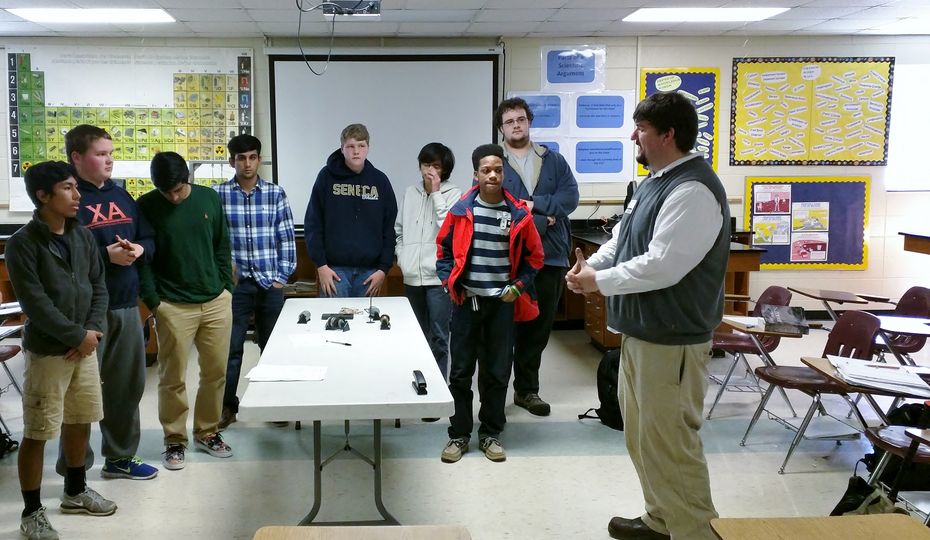 Brad Medlin, a 3D modeler at Oconee Nuclear Station, grew up around nuclear power as the son of a Duke Energy worker. “I have a picture of myself taken at the former education center at Catawba Nuclear Station that makes it look like I am on the turbine floor,” said Medlin. Medlin’s love of learning led him to volunteer to teach community members about nuclear energy.  “As a nation we have a fear of what we don’t understand. And the best way to rid ourselves of the fear is by presenting the facts to those willing to learn.”  Last year, Medlin had the opportunity to present to a class taught by one of his former high school teachers, which he said made his day.

For Tyler Andrews, nuclear advocacy started in college at N.C. State University when Andrews was a member of the student American Nuclear Society chapter. Now, as a nuclear engineer, Andrews spreads the word about nuclear energy through the Duke Energy Charlotte chapter of North American Young Generation Nuclear (NAYGN). “Informing people about nuclear energy is important to me because I believe the facts show it is the best energy choice for our future,” said Andrews.  He recalled a recent volunteer event at a local science museum where NAYGN members set up booths to educate children and parents about radioactive decay, chain reactions, electrical circuits, nuclear medicine and more. “Providing facts about the reliability and cost-effectiveness of nuclear energy allows the public to have an informed opinion and can help secure nuclear energy as a part of our carbon-free future.” 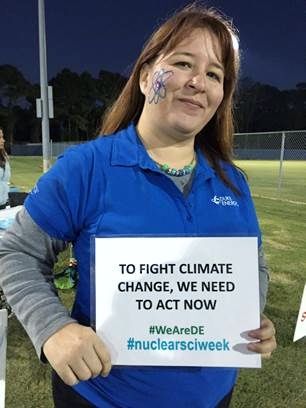 Roberts showing her love for nuclear at a community event

Melanie Roberts’ path to being a nuclear energy advocate started when she became a member of the U.S. Women in Nuclear organization. It was through this group that she learned about Nuclear Science Week and the importance of educating both students and adults about the advantages of nuclear energy. Robert’s favorite outreach experience, however, involved schools near Brunswick Nuclear Plant, where she works. “I am most proud of organizing 100 volunteers to go out into Brunswick County middle schools to perform hands-on activities for every 6th and 7th grade classroom in the county in just one week.  This was the most exciting and exhausting week ever,” said Roberts.