Electricity. It powers our daily lives, now more than ever. We are fortunate in the United States that we have diversity in how our electricity is generated and that our energy resources are cleaner and cleaner.

Nuclear energy provides about 20 percent of our nation’s electricity – enough to power 1 in 5 homes and businesses – and supplies about 63 percent of our nation’s clean energy. Nuclear energy also offers many other benefits including 24/7 availability, employment for many in steady, good-paying jobs; thousands of employees actively engaged in local volunteer activities and economic advantages for the communities where they’re located.

While more Americans are supporting nuclear energy, particularly after becoming informed on its benefits, there are still those who do not have the full story on used nuclear fuel. A common question is – what are you going to do with the waste?

So, let’s dispel some of the myths about used nuclear fuel. 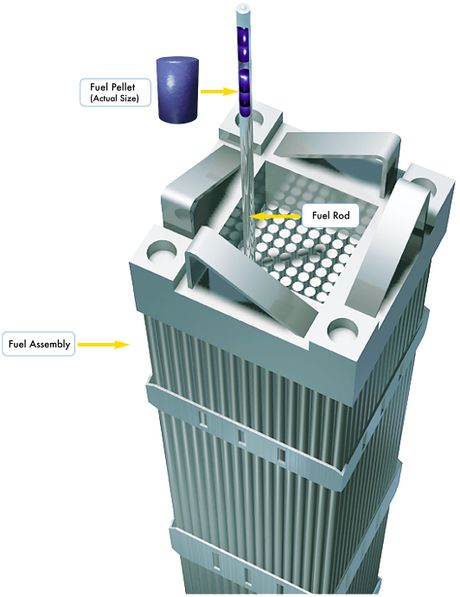 Used nuclear fuel is not green or oozy; rather, it consists of small, solid uranium fuel pellets stacked inside sealed metal fuel rods. The pellets are ceramic so they can withstand very high temperatures (think pottery). The fuel rods are bundled together into fuel assemblies.

So, what happens to the used fuel from our nation's nuclear power facilities?

First, used fuel is cooled in enclosed, steel-lined, concrete pools under about 20 feet of water. Used fuel storage pools are designed – like the nuclear plants they are part of – to withstand extreme events such as earthquakes, floods, hurricanes and tornadoes.

As fuel is stored, it continually becomes cooler and less radioactive due to the natural process known as radioactive decay. The country’s independent nuclear safety regulator, the Nuclear Regulatory Commission or NRC, recently completed and exhaustive, multi-year study of the safety of storing used fuel. The NRC concluded that the fuel could be stored safely and without significant environmental impacts for many hundreds of years, either at the reactors themselves or at consolidated storage facilities.

Considering how much electricity it has generated for our country, the amount of waste generated is small. The volume of fuel used across our nation for almost five decades, if stacked end to end, would cover an area the size of a football field to a depth of less than 10 yards. If all the electricity you used for 70 years was generated at nuclear facilities, the used fuel from that power would fit in a soda can.

On-site storage of used nuclear fuel was never intended to be permanent. In 1992, Congress mandated that the U.S. Department of Energy (DOE) develop a deep geologic repository for used nuclear fuel at a dry, remote, unpopulated site in the Nevada desert – Yucca Mountain. The Nuclear Regulatory Commission (the country’s independent nuclear safety oversight authority) recently concluded that a Yucca Mountain repository would successfully contain used fuel for at least one million years without harming the public. However, DOE missed its 1998 deadline to start removing fuel from reactor sites – and it still hasn’t started.

As a result, used fuel remains safely and securely stored at plant sites until a repository becomes available. The nuclear energy industry, through the Nuclear Energy Institute, is committed to working with Congress and the administration to address the federal government’s high-level radioactive waste management responsibilities.

Because DOE has taken so long to get a repository in operation, Congress and others are looking at the interim step of moving used fuel from reactors to a consolidated storage site (or sites). Communities in Texas and New Mexico have expressed interest in hosting a consolidated storage facility. This approach would be particularly attractive for fuel from shutdown plant sites that no longer have an operating reactor. Duke Energy has such a shutdown reactor at Crystal River, Florida.

Until a decision is made as to whether nuclear fuel will only be used once or recycled in the future, it will remain safe and secure at the nuclear facilities where it's been used to provide consumers across the nation an essential product – electricity.

Posted May 29, 2017 by JenniWest
Thank you so much for this article. I play with anti-nuclear folks as a hobby trying to get them to look at the facts of fission and this is always their number one complaint. Right after calling me a "shill" or a "troll." LOL This will be very helpful.