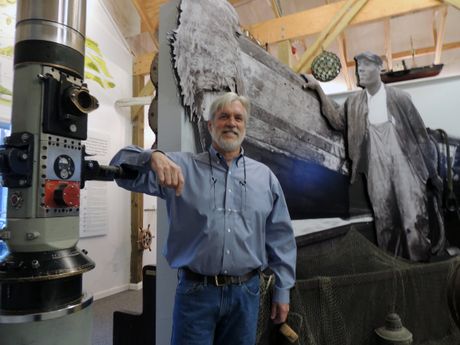 Nuclear Professionals Giving Back
Cecil Rhodes and the Maritime Museum

With about 28,000 employees scattered from the Carolinas to Florida and Indiana, and operations spanning 150 years, if you live in or near Duke Energy’s service areas chances are you know someone who works for the company or who did at some point. Indeed, retirees from Duke Energy, in all its manifestations, are a small army in their own right. These dedicated professionals built and operated some of the first commercial nuclear plants in North and South Carolina, dedicated their lives to running highly valued plants and are a gift to their communities. Known for their strong work ethic, commitment to community and skills in managing projects, Duke Energy retirees are just another reason that places like Southport, N. C. are some of the happiest places to live and work.

Rhodes joined the team at the Brunswick Nuclear Plant (a two-unit Boiling Water Reactor) in 1978 and in the 27 years that followed held several roles including “station nuclear engineer,” which he particularly enjoyed. Says Rhodes,

The role of “station nuclear engineer” (better known as “the nuc”) though intense was very rewarding, especially when changing reactor power. Managing a reactor core during power maneuvers, though not a game, is similar to playing 3-D chess, except a fourth dimension (time) is added. A change to one local area of the reactor core can significantly affect another area, at a different level, and at the same and/or future time. It was very rewarding to address all variables and successfully complete a maneuver. Today there are better tools to predict core response, but originally it was the nuc’s knowledge that enabled reactor core power maneuvers within the limits prescribed by plant technical specifications.

Like many of his colleagues, Rhodes also had a passion for fishing, boating and diving in the waters along the North Carolina coast. He joined the efforts to improve the local Maritime Museum in 1992, and after he retired, he was able to devote more time to the small museum. Since then, Rhodes has worked with the museum through two relocations and is wrapping up a major fundraising project to further expand and improve on the museum’s current building.

Walking through the museum takes one through the history of early exploration and settlement, pirates and the wars that ravaged the coastline. Exhibits include finds from sunken ships, information about early life in the Cape Fear region and the museum’s very own periscope. As described by the museum, it strives to tell “the story of the Cape Fear region’s people and their relationship to the water… a tale of tides, wind and ocean.” Having been part of that history for 40 years, it is no wonder that signs of the Brunswick Nuclear Plant are visible at the museum. On one wall in the “library” hangs a map of the Cape Fear river showing the location of the plant and its unique relationship with the waters, which are used to cool the plant and subsequently pumped off shore. The map once hung at the plant’s education center and when the display was upgraded, the map found its way to the Maritime Museum.

When asked why the volunteer work at the museum is important, Rhodes’ answer reflects his commitment to community:

I have lived the maritime life since childhood, and with it, experienced the region’s change from a fishing/shrimping based economy to one more dependent upon tourism and new residents. I’m very passionate about capturing our nautical culture and accurately portraying nautical life…. The Cape Fear region is rich in history with many interesting characters. It has to be captured, not forgotten. There are so many stories and actions of citizens past and present that make me proud to be a part of the area and I want to share it with others. Another reason the museum is important to me is having realized the importance it plays in the local economy…. The museum has become a significant “destination” with a clientele ranging from day trippers to world travelers.

This is no exaggeration. Reading through the list of visitors to Southport’s Maritime Museum, you can’t help notice the variety. Certainly there are local visitors, but also global. One page had entries from South Korea and Ukraine. That sort of draw didn’t happen by accident. For years, volunteers have worked to develop and preserve the maritime heritage of the lower Cape Fear region and give it a home amongst this modest collection of stories and artifacts.

On the third Tuesday each month you can find Rhodes at a local restaurant known as the Dead End Saloon where an informal gathering of retired nuclear workers congregates. Although many are retired for over a decade, it comes as no surprise that they meet regularly, with a standing meeting agenda, and are committed to looking after one another just as they always have. Visit with a few of these people and you cannot help notice those unique cultural traits of nuclear professionals.