As a young father helping out his daughter's elementary school, Michael Bollinger made the comment without even thinking after he watched a 5-year-old boy wearing a skimpy T-shirt get off a school bus on a chilly fall day.

“What kind of parents let their young’un go to school with no coat?” Bollinger asked the adults around him.

“Shhh Michael. They’re doing their best.” Whispered the empathetic principal, who was standing right beside Bollinger.

That was 28 years ago, but that day has always haunted Bollinger. It was an off-hand remark he knew he never should have made. But instead of dwelling on it, he used his experience to start a coat drive at McGuire Nuclear Station in Huntersville, N.C., collecting 4,355 total coats for charity over the years.

“We don’t think sometimes when we say things” said Bollinger, a security officer at McGuire. “The little boy never heard my comment, but still, I heard it. It was time to make it right.”

He started with the little boy.

After talking more with the principal and hearing about the plight of some parents, Bollinger brought the child a coat. The boy never knew where it came from and Bollinger mentioned it to no one. But Bollinger knew it was just the beginning of something. He decided he wanted to make an even bigger impact.

“You could see your breath – it was that cold.” Bollinger said “We were all standing out there with coats on and he didn’t have one.” 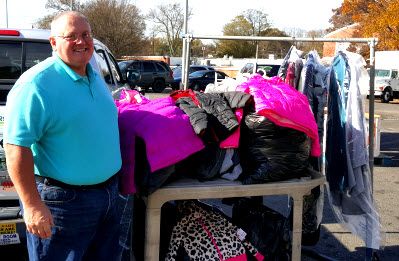 After some research and legwork, Bollinger began donating coats to his daughter’s school. Later, he set up a coat drive in his church. When he tried to set one up at McGuire, he ran into some roadblocks that were eventually removed by an unlikely champion for the cause, the late Bill Lee, Duke Power CEO at the time. A chance meeting during a plant visit gave Bollinger the opportunity to tell Lee his story and petition for a coat drive.

“He said ‘Sounds good to me. Make it happen,’” Bollinger recalls.

Bollinger and the donors have made it happen in a big way ever since. Every October, the staff at the EnergyExplorium, McGuire’s education center, sets out boxes to collect the donations of gently worn coats that employees – and even strangers give. They collect suede, leather and down-filled items – all kinds of outerwear. For a few years, Bollinger and his family paid to have the dry-clean-only coats professionally cleaned. Now, cleaners often provide the service for free.

“Mike and the coat drive he started have provided warmth for thousands of local families.” Said Christine Pulley, senior communications consultant at the EnergyExplorium. “We do many drives throughout the year, but the coat drive is one of the most popular we host on site.”

The EnergyExplorium staff helps Bollinger sort, organize and choose recipients of the coats. Over the years, the donations have gone to various organizations and agencies in Mecklenburg County and the surrounding counties of Lincoln, Catawba, Iredell and Gaston. Bollinger shuns the attention for his efforts, redirecting the focus to his colleagues instead.

“Don’t praise me,” he said. “If it weren’t for the people giving the coats, we wouldn’t have a program.”

This year, McGuire’s 28th annual coat drive collected more than 110 coats and several hats and gloves for the local community.

How are you going to learn during S.C. STEM Education month?