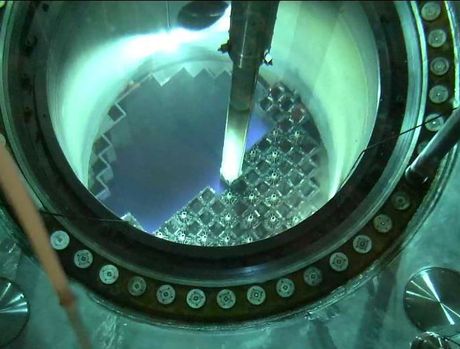 In the movies, a nuclear reactor is always shown shrouded in an electric blue haze. It is easy to assume this is simply a special effect, but the blue glow is an actual real world phenomenon known as the Cherenkov effect or Cherenkov radiation.

Cherenkov radiation is a form of electromagnetic radiation that occurs when an electrically charged particle travels through a clear medium, such as water or air, and is seen as a blue light. It was discovered by Pavel Cerenkov in the 1930s and expanded on by Ilya Frank and Igor Tamm. The trio won a Nobel prize for their work in 1958. The discovery “proved to be of great importance in subsequent experimental work in nuclear physics and for the study of cosmic.”

The Cherenkov effect can be seen near the reactor and used fuel at nuclear power plants. This is due to the radiation produced by the nuclear fuel during the fission process. Radiation is energy produced by an unstable atom that travels through space in the form of waves or particles. Nothing in the universe moves faster than the speed of light in a vacuum, but light is slowed significantly when it passes through spaces occupied by air or water.  The decreased speed means an electrically charged particle emitted by nuclear fuel being can move faster than the speed of light when it is covered in water.

While it may seem like science fiction, the blue glow surrounding nuclear reactors is actually based in science.