For most people, the transition from summer to fall means back to school, the kickoff of football season and the leaves changing colors.

Fall has a different meaning for those in the nuclear industry: outage season.

Across the country and across the Duke Energy Nuclear fleet, the cooler temperatures make fall a prime time for nuclear plants to temporarily shut down to refuel and perform routine maintenance. Cooler temperatures in the fall lead to less demand for electricity than in the summer heat or the winter chill. Most nuclear plants shut down for refueling every 18 to 24 months. 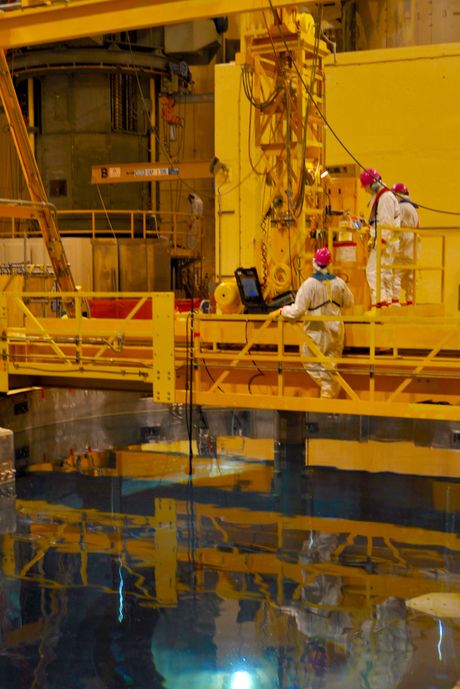 A crew works to move used fuel during a recent outage at Harris Nuclear Plant.

During a typical nuclear plant outage, workers replace about one-third of the fuel in the reactor. The process for refueling is different for pressurized water reactors (PWRs) and boiling water reactors (BWRs). In a PWR, typically all of the fuel is removed from the core and placed in a used fuel pool, making it easier to conduct maintenance on the reactor core itself. This process occurs when the fuel assembly is turned on its side and then moved through an underwater canal to the fuel pool, which is usually
located in a different building from the reactor. Once all of the fuel is in the fuel pool, the plant workers will remove one-third of the fuel and replace it with the new fuel. They will also conduct what’s called a “core shuffle,” which means the new fuel is intermixed with older fuel—that will continue to power the reactor—in order to ensure efficient use of the fuel. In a BWR, the reactor operators typically do not remove all of the fuel—only the used fuel. This saves time, especially since BWRs have more fuel assemblies than PWRs. During the refueling process, the used fuel is pulled out of the reactor from the top and is placed in the spent fuel pool, which in most BWRs is located next to the reactor. The operators then conduct the core shuffle and insert the new fuel.

Outages also include routine inspections and maintenance, but they can also be a time to replace equipment ranging from valves to steam generators. During outages, usually 1,000 to 2,000 extra workers are on site, depending on the scope of the maintenance, with shifts working around the clock seven days a week. During a refueling outage, plant workers have greater access to many areas of the plant that are sometimes difficult to access during normal operations, such as areas close to the reactor core. This lends itself to being a great opportunity to conduct routine inspections and maintenance and perform any necessary repairs. 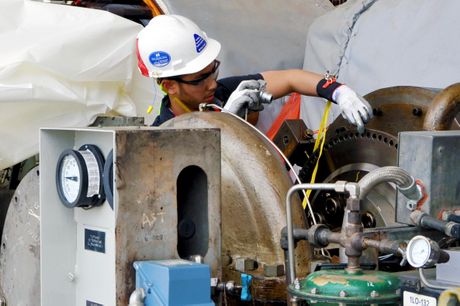 A worker inspects equipment associated with the high-pressure turbine during a recent outage at Harris Nuclear Plant.

The type of maintenance that is conducted varies by plant, but an example includes inspecting or testing pumps and valves to ensure that they are working properly. The plant will place many of these routine maintenance activities on a schedule so that certain equipment and instrumentation is evaluated each refueling outage, whereas others may only need to be inspected every other outage or less frequently.

Although a nuclear plant could potentially perform refueling on two reactors at a time, it is generally not done for two reasons. First, a refueling outage requires a large amount of human and financial resources. Second, nuclear energy facilities provide baseload electricity—meaning they pump out electricity around-the-clock—and when they are not operating, it is sometimes difficult and costly for the utility to purchase electricity from other sources, sometimes in other states. Again, this is why utilities conduct refueling in the spring or fall when electricity demand is generally low, so that it minimizes the impact to the electricity grid.

#Nuclear accounts for about 47% of electricity in the Carolinas with zero carbon emissions. https://t.co/f6tjwgbFGO