Duke Energy has a long history of employing veterans of the United States Armed Forces across its enterprise. It is Duke’s longstanding belief that the knowledge and skills gained in the military translate well to a rewarding career in the electric utility industry. Veterans know how to evaluate risk, work as part of a team, overcome obstacles and solve problems. Duke Energy values these qualities in its workforce. Nowhere is this more true than in Duke’s nuclear fleet, where U.S. military personnel and veterans fill engineering, technician, operator and security positions.

“U.S. military veterans are, and will continue to be, vital to our nuclear workforce,” said Duke Energy’s Chief Nuclear Officer Bill Pitesa. “Across our fleet, former sailors, airmen, soldiers, marines and guardsmen and women are integral to the safe and efficient operation of our nuclear facilities.”

The nuclear industry is especially interested in graduates of the U.S. Navy’s Nuclear Propulsion program since the fundamentals and components education graduates receive is directly applicable to careers at nuclear power plants. With the shortage of skilled workers in nuclear energy, and the impending retirement of a significant number of workers, this pipeline is of vital importance to the industry. 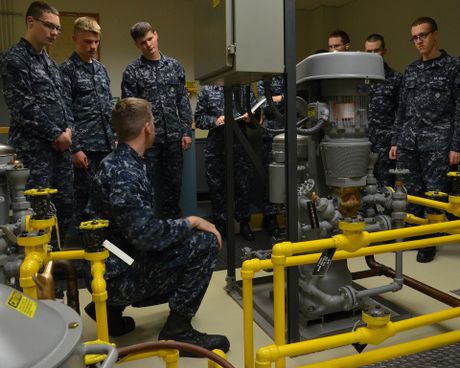 Students at the U.S. Navy Nuclear Power Training Command "A" School receive fundamental rate training for future nuclear Machinist's Mates, Electrician's mates and Electronic Technicians. Many of the skills learned here are useful as sailors transition out of the Navy into civilian employment.

So important, in fact, that the civilian nuclear industry and U.S. Naval Nuclear Propulsion program signed an agreement in 2012 establishing the first systematic program that allows personnel separating from the Navy to seamlessly transition to civilian employment. The agreement of understanding is the first, formal partnership between the Navy and the nuclear energy industry, including Duke Energy, designed to put veterans to work in the growing domestic nuclear energy field.

“The nuclear industry expects to hire about 25,000 more workers over the next few years, and this agreement allows us to bring in experienced, highly skilled people who deserve rewarding civilian careers after selfless service to their country,” said Tony Pietrangelo, the Nuclear Energy Institute’s senior vice president and chief nuclear officer in a news release.

The nuclear energy industry is one of the few industries with a security program that is regulated by the federal government. Security officers must be highly trained and well-armed to meet the standards set forth for nuclear power plants. Military veterans meet these criteria and therefore are highly sought after to man the security teams in nuclear.

“We look for a certain skill set and aptitude when we hire nuclear security officers,” said Harris Nuclear Plant’s Director of Nuclear Security Linwood Faulk. “What I have found is that veterans bring those skills to the table and it flattens the learning curve when we hire new people.”

Due to ongoing expansion, the nuclear energy industry is a job-creating engine. The industry is hiring thousands of well-paid workers to build new reactors—and up to 700 permanent staff to operate each site for the long term. Due to expected retirements the industry plans to hire as many as 20,000 highly skilled workers by 2018 to operate, maintain and secure existing reactors. Duke Energy is committed to filling those vacancies with highly-trained veterans of the U.S. Armed Forces.

Over the coming months, look for profiles in this space on the military veterans who help make Duke Energy’s nuclear fleet one of the best in country.