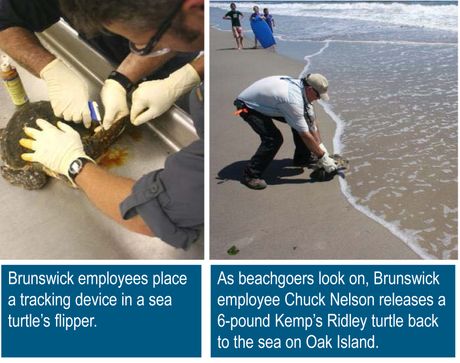 Duke Energy's nuclear fleet is committed to environmental stewardship. Responsibly managing and protecting natural resources is essential to a cleaner environment, the quality of life in the communities served and the company’s long-term business success. A good example of that stewardship can be found at the Brunswick Nuclear Plant in Southport, N.C.

Because the plant is near the Atlantic Ocean, migrating sea turtles occasionally travel onto plant property when unusual tides and storms push them through barriers in an on-site canal. When a sea turtle is found on plant property, the site’s environmental specialists capture it and give it a thorough checkup. Depending on the turtle's condition, plant scientists may partner with the state to provide additional care or rehabilitation. If the turtle is healthy, it’s tagged with a tracking device that allows the company and the state to monitor its migration habits. After being tagged, the turtles are released back into the ocean.

Because the plant draws water from the lower Cape Fear River to aid in the cooling of plant systems, several intake modifications were installed to protect fish, shrimp, and crabs found in the area. A large fish diversion structure was constructed in 1982 at the mouth of the intake canal to ensure debris and wildlife are kept out of the intake canal. Installation of the diversion structure resulted in a reduction of 85 to 95 percent in the numbers of marine life affected by plant operations. An additional measure of its effectiveness is there were no sea turtle strandings during this year’s turtle nesting season.

Fish-friendly intake screens and a fish return system were installed at the station intake structure in 1983. The fish return system prevents fish, shrimp and crabs from being drawn into the plant's cooling system along with the cooling water. The return system is further enhance by the installation of 1-mm fine-mesh screens to ensure larval fish and shellfish are also saved. Substantial numbers of fish, shrimp and crabs are returned alive to their nursery habitats by the continuous operation of the fish-friendly intake screens and return system. In addition, station cooling water flow is also reduced from December through March to further minimize effects on the large numbers of larval fish found in the lower Cape Fear River during those months.

Significant biological studies of the lower Cape Fear River were conducted by the company in partnership with academic institutions and state and federal resource agencies from the 1970s to the 1990s to enhance understanding of the environment around the Brunswick Nuclear Plant to ensure plant operations had minimal effects on the environment.  Ongoing studies by plant personnel and company biologists continue to demonstrate minimal effects of plant operations on the environment.

How a small S.C. nonprofit makes a big environmental impact