On a recent warm afternoon, Duke Energy biologist Tom Thompson pulled up to a boat ramp on Harris Lake in New Hill, N.C., where an angler was eager to show him his catch: a net full of large crappie, each weighing about a pound or greater. 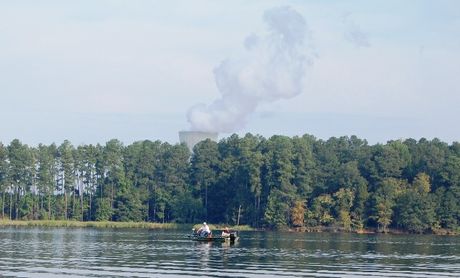 According to Thompson, this was not an unusual site. “Harris Lake has an ideal balance of nutrients and aquatic vegetation, plus little to no shoreline development, which has resulted in enhanced fish production,” explains Thompson, who has been monitoring fish populations at the lake since 1994.

The lake is especially popular for sport fishing, with largemouth bass the most sought after species, followed by black crappie, bluegill, and several species of catfish. The average size of bass ranges from two to four pounds, although biologists have occasionally collected and released bass weighing up to 10 pounds.

Company biologists sample Harris Lake four times a year.  Shoreline boat electric fishing, similar to what the Wildlife Resources Commission also uses, is conducted at 10 standardized locations for 15 minutes each. The temporarily stunned fish are netted and placed in a holding tank for processing, where they are identified, counted, measured, weighed, and inspected for diseases and deformities.

How can we ensure the lake continues to support a healthy fish population? 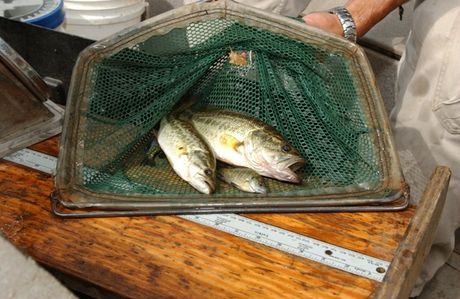 Environmental studies show that the overall biological productivity of Harris Lake is comparable to other Piedmont lakes. Largemouth bass and bluegill, shown above, are commonly found in Harris Lake.

According to Thompson, it’s all about keeping people informed.  “We need to educate people not to release other species into the lake, such as spotted bass, which is native to the central region of the U.S.

“This has the potential to diminish largemouth bass populations due to competitive interaction,” he explained. Thompson also cites an article in the July-August 2012 issue of Wildlife in North Carolina, which indicates competitive interaction between the two black bass species in Lake Norman and in portions of the Cape Fear and Yadkin River basins.