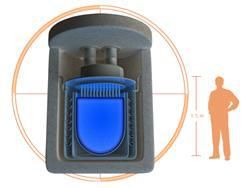 Small modular reactors (SMRs) produce 300 megawatts or less of power, and are about one-third the size of conventional nuclear reactors.

Like the Mini Coopers of the automotive world, a new generation of mini-nuclear reactors may soon be driving nuclear energy production to places that their larger counterparts have difficulty reaching – remote areas that have little or no access to the main power grid.

Small modular reactors (SMRs) produce 300 megawatts or less of power, and are about one-third the size of conventional nuclear reactors.  And, like Mini Coopers, SMRs are environmentally friendly and can be made in factories.

Though the military has long used SMRs to supply energy to bases and submarines, the nuclear industry has yet to use them to power U.S. homes and businesses. Now, for the first time in U.S history, the nuclear industry is close to bringing SMRs into commercial use with support from the U.S. Department of Energy (DOE).

Last January, the DOE called for applications from the nuclear industry to support the development of small reactor designs. After reviewing four SMR designs, the DOE recently awarded matching funding to Babcock & Wilcox Co. (B&W) for the development of its mPower reactor. The mPower is capable of generating approximately 180 megawatts of power, which is enough power to supply electricity to more than 100,000 homes.

B&W has been working on the design for the past four years with the Tennessee Valley Authority (TVA) and Bechtel International. The company plans to build an SMR plant with two reactors that will generate a total of 360 megawatts and submit a licensing application to the Nuclear Regulatory Commission (NRC) in mid-2014. 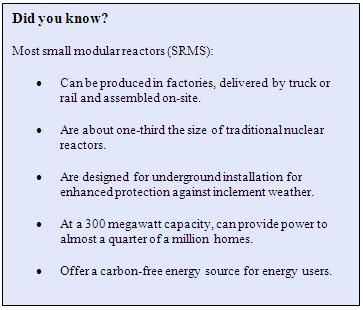 “The DOE’s matching funds could jumpstart the development of smaller reactors to bring clean, reliable and affordable power to people living in remote areas or locations with inclement weather challenges,” said Blair Wunderly, director of engineering at the Crystal River Nuclear Plant in Citrus County, Fla. “The DOE’s decision to support the development of SMRs is a reflection of the importance of nuclear technology in the country’s energy mix.”

Nuclear generation is the only emissions-free fuel source capable of producing electricity 24 hours a day without using fossil fuels. Just one nuclear generation uranium fuel pellet, which is about the size of a piece of Chiclet gum, is equivalent to one ton of coal, 149 gallons of oil and 17,000 cubic feet of natural gas. Though solar and wind are other environmentally-friendly energy sources, those technologies cannot yet produce enough output to meet consumer demand.

B&W is an energy technology company based in Charlotte, N.C., which is also home to Duke Energy’s headquarters, the country’s largest utility. In addition to the mPower, B&W has designed nuclear reactors at Duke’s Oconee Nuclear Station (ONS) in Seneca, S.C. and Crystal River Nuclear Plant (CRNP) in Citrus County, Fla.

Like the ONS and CRNP reactors, the mPower uses a pressurized water reactor (PWR) system. mPower reactors can be installed underground, enhancing protection against weather-related events, such as hurricanes. The mPower also offers four years of operation between refueling cycles whereas conventional reactors refuel every 18 to 24 months.

“Part of the challenge of bringing SMRs into commercial use is the cost of licensing,” said Wunderly. “The DOE’s agreement to assist will offset some of those costs, making creating new nuclear generation more feasible and ultimately reducing the country’s dependence on fossil fuels.”