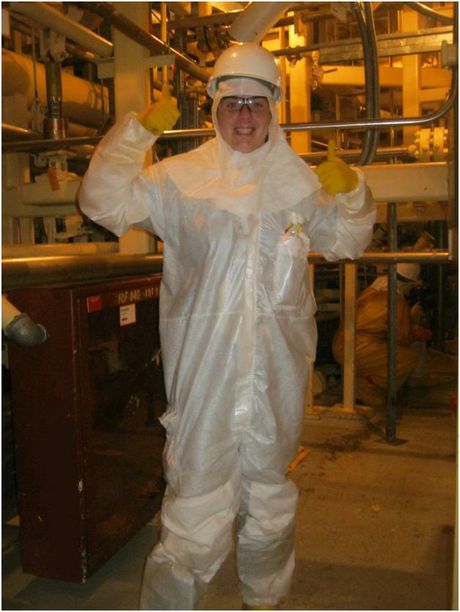 Reactor Engineer Jenn Saucier shows off her personal protective equipment before she starts work in the plant.

Q. What is a reactor engineer? What exactly do you do?

After three years I am still trying to figure that out sometimes. I guess the best way to answer this is in bullet form…

Q. What does your work environment look like? Are you in an office or are you in the plant surrounded by pipes?

My work environment changes every day. Most days I am in an office environment. I have my own cozy little cube. Sometimes my time is spent in the control room, working with operations to respond to plant issues or performing surveillance tests. Some days require me to go to the used fuel pool - especially days when we receive new fuel for the next cycle. During refueling outages I spent a lot of time in the containment building. As the reactor vessel engineer, the only time I get to put my hands and eyes on my equipment is during an outage.

Q. Who do you work with? What is your team like?

My group is made up of six engineers and a supervisor. I would estimate the average age of our group to be mid-thirties, which is actually quite young - not just for groups across the site but also the industry. Five of us, including my supervisor, have been in the industry less than 15 years; three of us actually have less than five years in the industry. Five of the six engineers in the group have nuclear engineering backgrounds. The other engineer has a mechanical and civil engineering background. He owns the fuel handling equipment (cranes in the used fuel pool and reactor building, as well as the transfer system) and the dry cask storage system.

Q. I bet you've seen some pretty cool stuff as a reactor engineer. What is the coolest thing you have ever done as part of your job?

I get to do a lot of cool things as a part of my job. Not many people get to put their hands on nuclear fuel; I do that while performing inspections when we receive new fuel, before it is placed in the used fuel pool or irradiated. I also do a lot of climbing around the reactor vessel during outages, another place not very many people, even those on site, ever go. I have led the evolution with operations to take the reactor critical (restart the self-sustaining chain reaction), the first step to making nuclear power. The list could go on.

Check back next week for the conclusion of our interview with Jenn.