Any one of the oversized spotted sea trout swimming contentedly in a 3,000-gallon tank would make an impressive main dish. Yet none of these former ocean dwellers is destined for a dinner plate. Instead, they are under the watchful eye of Eric Latimer, senior environmental specialist at the Crystal River Mariculture Center in Citrus County, Fla. 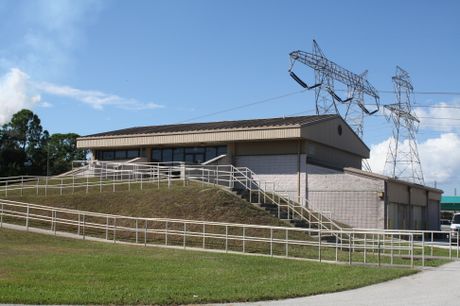 The two-story, 8,100-square-foot Crystal River Mariculture Center is located adjacent to the Gulf of Mexico in Citrus County, Fla.

Latimer is responsible for creating and maintaining ideal conditions for spawning, or reproduction, which is integral to the Mariculture Center’s mission of offsetting potential effects of the Crystal River Energy Complex’s (CREC’s) electricity production on marine life.

What began as an innovative, cost-effective way to lighten the plant’s environmental footprint in 1991 has now evolved into one of the most successful marine hatcheries and stocking programs in Florida. Since its opening, the center has cultivated and released more than 2.8 million fish, shrimp and crabs into the coastal waters of the Gulf of Mexico.

Latimer attributes the center’s success to his dedicated team and to the careful daily study of the behavior and habits of the species being cultivated. Having been with the center since its inception, Latimer has developed exceptional insight into the unique idiosyncrasies of each species.

During a recent tour, Latimer warned guests not to put their hands above the tank that houses the spotted sea trout. “Just look through the observation glass, because spotted sea trout are so sensitive that if they see movement, they’ll become stressed,” he said; “and stressed sea trout won’t reproduce.”

In fact, spotted sea trout can become so agitatedthey will throw themselves against the wall of the tank. The inhabitants of the spawning tank next door, on the other hand, are not so skittish. The red drum fish in this particular tank were relatively oblivious to visitors peering at them through the viewing window. 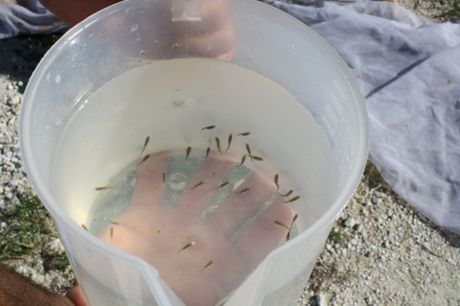 Two-week-old red drum fish hatchlings will grow to three to four inches before being released into the Gulf of Mexico.

Still, all of the species in the two-story, 8,100-square-foot complex need just the right lighting, water chemistry and temperature before they will reproduce.  As an added challenge, Latimer and his staff strive to condense each species’ natural reproduction cycles to produce more offspring in shorter periods of time.

How is this achieved? Latimer said it is both an art and a science.  He and his staff integrate knowledge of marine ecology with technologies associated with fisheries to trick the fish into spawning more frequently. He also checks on them every day, even on weekends and holidays.

“This is a seven-day-a-week job,” he said. “So many variables are involved with maintaining viable environments for spawning that the work requires constant vigilance. It takes true passion, and I am fortunate to live and work my passion every day of the week.” 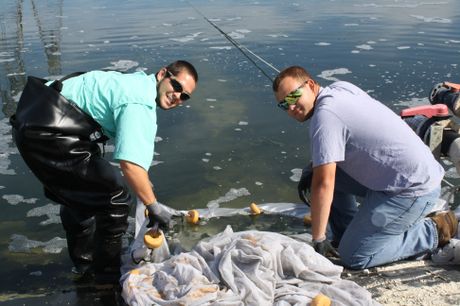 After successfully encouraging one of the center’s 12 targeted species to spawn, Latimer moves the eggs to special incubation tanks to allow hatching to proceed. After several days, the fish are moved to one of the center’s eight one-acre outdoor saltwater ponds. Here, the young fish feed and grow until they are large enough to have a strong chance of survival when released.

“I know we have achieved our goal when I get a call from a fisherman who has caught one of our tagged fish,” said Latimer. “When a fish has grown from seven or eight inches upon release to being caught at 29 inches, I know the fish we’ve raised are doing well.”

Protecting the environment is a daily commitment: Three things you didn’t know about our Environmental Sciences team