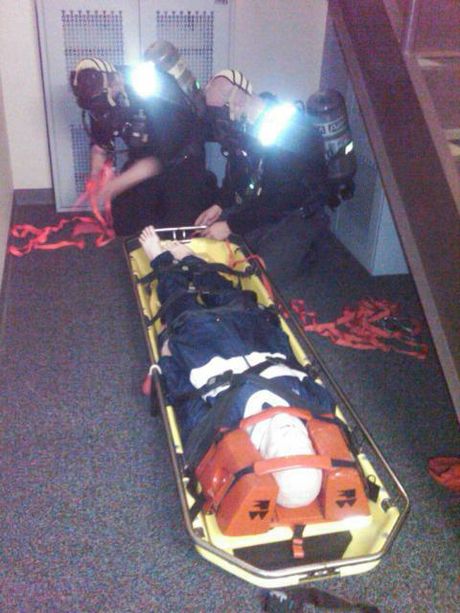 Two MERT teammates perform one of many training exercises.

All MERT teammates have first responder training, CPR certification from the American Red Cross, first aid training, technical rescue training and many other qualifications. There have been many instances over the years where the skills and expert training of several MERT teammates have rescued, not only McGuire Nuclear Station teammates, but also their neighbors and family members.

Recently, two McGuire (MERT) teammates demonstrated the great ability and competence their MERT training has given them.

Russell Dunlap recently saved the life of his neighbor’s infant while he was working in his yard. “A woman frantically approached me carrying a baby and screaming that her child was choking,” Russell said. “I took the baby, noticed the child was in distress, but I didn’t see anything in her mouth. I put her into the rescue position MERT teaches for choking infants. I delivered back blows hoping to dislodge whatever was causing the problem.” Russell then reached into the child’s mouth to remove a plastic piece of toy. “The child coughed and then started to cry - much to my relief. The mother cried too and I almost did,” he said. The baby was seen by a medic and was doing well. When told the story, the medic personnel were impressed by Russell’s response. “They also commented on how impressed they are with MERT at McGuire, having worked with us before,’ he said. Russell, who is 47 years-old, has been a part of MERT for 20 years. 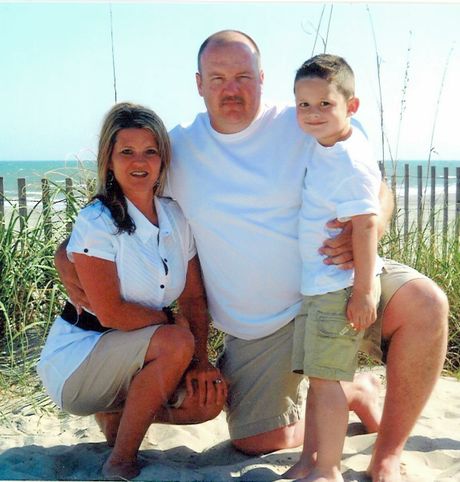 John Lineberger with his family at the beach last summer.

Another MERT team member, John Lineberger, used his training to save his five year-old son, Tanner. John and his son were sitting on their living room sofa watching TV, when John looked over at his son and saw he had his mouth open trying to speak and that his face was turning very red. “He couldn’t breathe, so I popped him on the back. His lips started turning blue, so I placed him in my arms, got behind him and as I administered blows to his back, I used my left hand and arm to administer an upward motion to his stomach.” John’s quick actions forced three stuck grapes out of his son’s mouth and allowed him to breathe again. Only after his son could breathe again did John’s emotions overwhelm him. “I was scared by what just happened. Without my training, I don’t know what I would have done,” John said. When John was going through training, his instructor, Mike Bollinger, told John, “One day, you will use this.” “I didn’t know how right he was,” John said.  The incident spurred John’s wife to take a CPR class at work, so she too can be prepared for emergencies.

Russell Dunlap and John Lineberger are two of 42 MERT team members at McGuire. MERT professionals at McGuire are some of the most highly trained individuals in the country. George Nichols, MERT coordinator, said, “The MERT organization, as a whole, has been recognized time and time again by individual groups and by site management. We understand the need for our services here at the site and feel we are a vital part of McGuire. Our success is a direct result of the time, energy and commitment of each team member.”

How much do you know about outdoor warning sirens?

Emergency Planning - Why it's a top priority